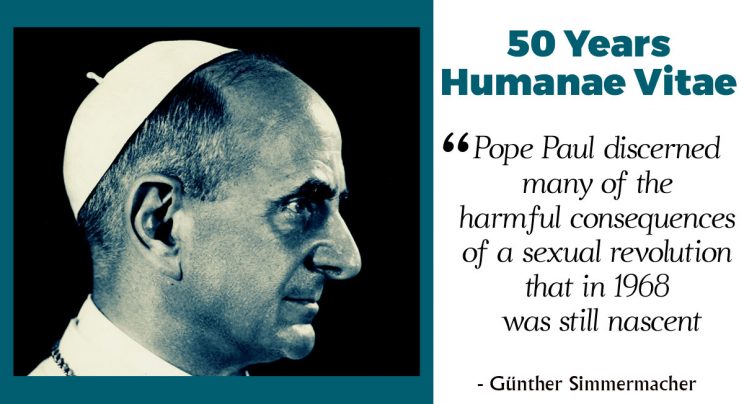 Much has changed in the half century since the release of Pope Paul VI’s controversial encyclical Humanae Vitae (“Of Human Life”), and yet a lot of it is more prophetic now than it was in 1968.

While it is tempting to reduce Humanae Vitae, released 50 years ago on July 25, to its prohibition of the conjugal use of artificial contraceptives — which remains controversial even now — the encyclical was much more than that. in evaluating the encyclical, it may be useful to distinguish between what concerns the disciplines regarding birth control addressed to individuals, and the sociological impact of the “sexual revolution”

Indeed, in evaluating the encyclical, it may be useful to distinguish between what concerns the disciplines regarding birth control addressed to individuals, and the sociological impact of the “sexual revolution” which was driven, at least in part, by the availability and normalisation of contraceptives.

Even those who disagree with the prohibition on artificial birth control will find pertinent insights in Humanae Vitae, such as its concern about the devaluation and objectification of sex, the alienation of sex from its primary procreative function, the decline of marriage, and the creeping loss of the sense of sanctity of life, especially the unborn.

Pope Paul discerned many of the harmful consequences of a sexual revolution that in 1968 was still nascent.

But we must beware of using 1968 — the sexual revolution and Humanae Vitae — as some kind of moral breaking point. For example, the notion (suggested by an essayist in this edition) that the sexual exploitation of women, which found its opposition in the #MeToo campaign, is a result of the sexual revolution, is open to challenge.

Arguably, it is a greater openness towards sexuality which facilitated #MeToo, whereas older standards — including and especially those which preceded 1968 — tended to conceal and even trivialise sexual exploitation and violence.

All the same, sexual violence is still a reality, and it is being fed by a combination of social factors which include the modern objectification of sex — in pornography, on film and on magazine covers — as well as old-fashioned patriarchal dominion.

On the sociology of Humanae Vitae, most Catholics can broadly agree. But the 50th anniversary of the encyclical is a good time to bridge the polarisation the encyclical created with its restatement of Catholic tradition which proscribes artificial contraception.

For large numbers of Catholics, this polarisation is unimportant. They either follow the teachings of the Church, or they believe that the ideals of Humane Vitae make unrealisable demands on them, or they choose to simply disregard the Church’s teachings in the belief that the prospect of their salvation is not diminished by the use of artificial contraception. That decision was his papal prerogative, but it cannot be said that there ever existed a consensus on the disciplines taught by Humanae Vitae

Before Pope Paul wrote the encyclical, he asked a commission of eminent persons to advise him on the contraception question. The commission in 1967 concluded that artificial birth control was not intrinsically evil and that its use should be at the discretion of married couples. In the event, the pope disregarded his commission’s majority recommendations.

That decision was his papal prerogative, but it cannot be said that there ever existed a consensus on the disciplines taught by Humanae Vitae. And experience shows that such a consensus cannot be enforced.

The late theologian Avery Dulles SJ observed in 1993 that by the time Humanae Vitae was issued, “many Catholics had made up their minds to follow the less rigorous opinion, which was presented as solidly probable”. The theological dissent following the encyclical “was in itself a manifestation of the popular conviction that contraception was tolerable and sometimes necessary”.

The teachings of Humanae Vitae can be modified, but it is unlikely that Pope Francis is inclined to do so. Rather, he may well try to bridge the gap between doctrine and pastoral application, as he has already done in other areas. the Church must continue to point out the ethical, spiritual, social and medical problems with artificial contraceptives

It is conceivable (to coin a pun) that Pope Francis may bring the Church in line with the widespread pastoral practice in most parishes, which leaves the use of artificial contraceptives to the informed conscience of the faithful.

At the same time, the Church must continue to point out the ethical, spiritual, social and medical problems with artificial contraceptives, and propose reasonable alternatives for family planning, such as the Billings method.

Fifty years after Humanae Vitae, and in the year of his canonisation, that may be a solution Pope Paul VI could accept.