The Night I Drove Home Naked 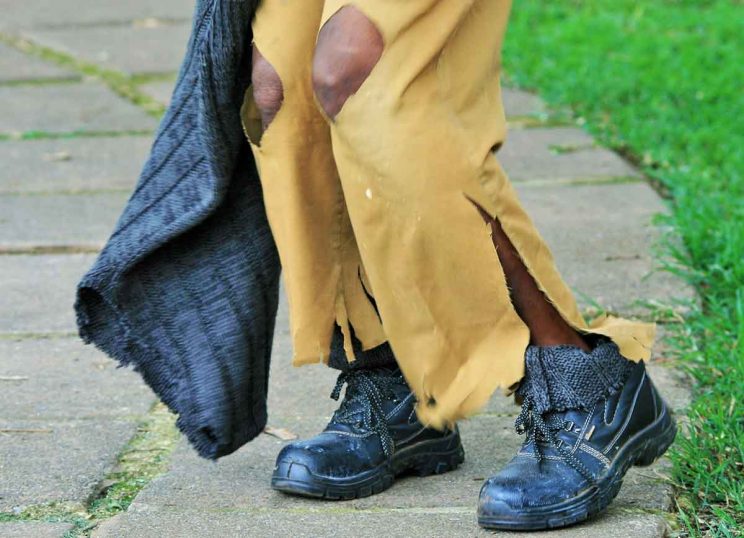 “Too many times I’ve ‘driven past’ those in need. I’ve not stopped because ‘It would hold up traffic’, or ‘I was late or busy’, or ‘They’d probably just spend it on alcohol or drugs anyway’. These are pitiful excuses,” writes Francis Tuson.

How often to we see God in the beggar? FRANCIS TUSON writes about a time when he was confronted with poverty and had an epiphany.

Even as I sit and write this, I am aware of my inherent hypocrisy.

Jesus said: “When you give alms, do not have it trumpeted before you; this is what the hypocrites do in the synagogues and in the streets to win human admiration. In truth I tell you, they have had their reward” (Mt 6).

But even so, I hope the reader may get something from my story.

Driving home from a friend’s house, a few hours into the evening, I was contemplating how incredibly blessed I am.

I am not rich. I work for a small NGO, and while rewarding and enjoyable, it is not the most lucrative job there is. However, I still have more than I need, and for that I’m incredibly grateful.

As I pulled up to a traffic light, behind a beautiful Land Rover, I noticed a man on the side of the road. He was not overtly begging. He was just sitting there with his head in his hands—naked.

I did a momentary double take, the light turned green, and I drove past. Half a block later, while thinking about the bitter cold, I did a U-turn and drove back towards the intersection.

As I approached, it was clear that no one had so much as offered the man some money.

He was still sitting in the same position, and considering his abject nudity, he had nowhere to put any money, even if someone had stopped to give him some.

I pulled over, got out of the car, and called out to him several times — with no response. Although slightly fearful — crime in our country being what it is — I approached him, still trying to get his attention.

By the time I got right up to him I still hadn’t got a response, so I gently tapped him on the shoulder. He immediately jumped up in fear, flinching away from me, and looking up with a tear-streaked face.

The only thing he had was a small piece of rubbish wrapped thong-like around his crotch, an attempt at some sort of modesty.

Is this a bad joke?

I motioned him to follow me to the car. Once we got there, I took off my shirt. He was shivering badly, so I helped him into it. He smelled like alcohol and seemed a bit muddled.

I then took off my shoes, put them in the car and removed my trousers. As I handed my trousers to the man, he was still looking at me with worry, unsure if maybe this was a bad joke.

While he was putting my trousers on, I got some money from my wallet to give to him. As I handed him the money, he looked suggestively at his feet and said quietly: “Shoes”.

So, a little reluctantly, I got my shoes out of the car and handed them to him. He almost snatched them out of my hands, he was so desperate.

Very cold and aware of the strange looks I was getting from passing motorists, I quickly got back into the car and started the engine. I almost drove off when I realised I didn’t even know his name. I quickly wound down the window, letting the cold in again, and called out to the man, who was just standing in silence where I had left him,

“Good to meet you,” I said, my voice cracking, “My name is Frank. God bless you.”

I said “God bless you” one more time, and then drove off in tears, unable to make sense of the tangle of emotions welling up within me.

As I drove home, wearing only my underwear, I slowly realised that the largest part in the mix of emotions I was feeling was anger.

Why I got angry

Anger at the circumstances that led Ephraim to that rock bottom point in his life.

Anger at those people in their big fancy cars who couldn’t bring themselves to care for a fellow human being, even when presented naked, right by their car window, on the street in winter. Here was an opportunity crying out for empathy and compassion.

But I was mostly angry at myself, for not doing more. More for Ephraim, certainly. But especially not more for all the other people in need I’ve come across in the course of my life.

I am not rich, but the next day, it was a fairly painless thing to go shopping and replace the clothes I had given away.

Too many times I’ve “driven past” those in need. I’ve not stopped because “It would hold up traffic”, or “I was late or busy”, or “They’d probably just spend it on alcohol or drugs anyway”. These are pitiful excuses.

We cannot personally eradicate all poverty. In Matthew 26 Jesus said: “The poor you will have always with you.”

But we can do something, like the man on the beach covered in storm-tossed starfish who, although the task was impossible and overwhelming, kept throwing the starfish back into the sea one at a time because, “it made a difference to that one”.

We need to collectively re-sensitise ourselves to poverty and pain as a culture. We are especially bad at dealing with difficult emotions in South Africa, despite—or maybe because of—our history.

However, as we can see with the current global refugee crisis, the problem is not localised. There is not always something we can do, but at the very least, we have to recognise the inherent humanity in the marginalised and suffering.

Recently, and occasionally with great difficulty, I’ve been trying to live with the beautiful isiZulu greeting “Sawubona” in mind. Literally translated it means, “I see you”.

We all need to look up and see the people around us. God lives in the heart of every one of them, no matter their circumstances.

Francis Tuson works at the Jesuit Institute in Johannesburg.

What is Our Heritage?