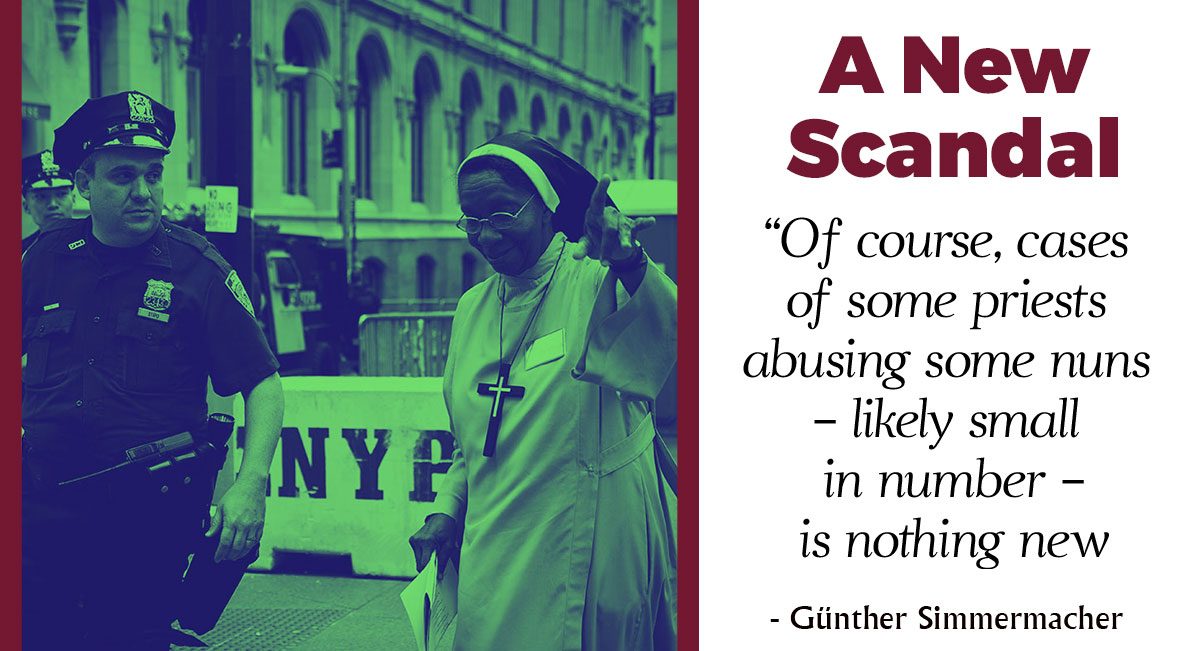 The Church must prepare itself for a new wave of scandal: revelations of sexual abuse of nuns by priests.

In recent weeks, religious Sisters from a congregation in Chile told national television their stories of abuse by priests and other nuns — and how those in authority knew but failed to protect them. In India, a nun filed a formal charge against a bishop whom she accused of having raped her. this could be the #MeToo moment for religious Sisters

Allegations which until recently were whispered are now going public. As Associated Press has suggested, this could be the #MeToo moment for religious Sisters.

Of course, cases of some priests abusing some nuns — likely small in number — is nothing new. Four reports in the 1990s outlined the problem in Africa, pointing to a serious issue, while stressing that the allegations of abuse were not representative of the African clergy.

When the reports were published in 2001, the Vatican acknowledged their accuracy, and the Southern African Catholic Bishops’ Conference responded by drafting a protocol to act against these abuses.

Since those reports were issued, the Church in Africa is said to have made progress, with Sisters in many places becoming more emancipated — but the problem persists.

The latest allegations emanate from South America, Asia and Europe. The problem seems to range across the continents, as it does through time.

And now it is being spoken about, even as those deterrents that tend to silence these victims of abuse — the Catholic Church’s institutional culture of secrecy, its patriarchal structure, clericalism, misogynist prejudices, vows of obedience, fear and shame — remain powerful. As it was with the disgrace of clerical abuse of minors, the even greater scandal here is the insidious culture of silence and cover-ups by those in authority.

As it was with the disgrace of clerical abuse of minors, the even greater scandal here is the insidious culture of silence and cover-ups by those in authority.

Some whistleblowers have been treated shamefully.

In 2013, a priest in Uganda was suspended until he retracted his allegations that some “priests [are] romantically involved with religious Sisters” and apologised for making them.

In Malawi in the 1990s, a bishop dismissed the heads of a diocesan women’s congregation after they protested about diocesan priests having impregnated 29 nuns. Has the Church taken action against these bishops, and others in authority who have covered up such abuses?

Has the Church taken action against these bishops, and others in authority who have covered up such abuses?

The Vatican has long known about these abuses, as its acknowledgment of the reports released in 2001 illustrates, but has done nothing concrete about it.

One can understand the temptation to keep scandal under wraps. It embarrasses the Church, it upsets the faithful, it could even lead people away from the Church. But none of these may take priority over the protection of women religious from sexual abuse.

As the scandal gathers pace, as it surely will — internationally and possibly closer to home—we must be clear that the vast majority of priests are innocent of such allegations, and the vast majority of nuns have not been subjected to abuse, or other forms of corruption of their vows of celibacy. We must not generalise, never mind allow salaciousness to enter the conversation. Indeed, this would compound the abuse of the victims.

We must not generalise, never mind allow salaciousness to enter the conversation. Indeed, this would compound the abuse of the victims.

The full implications of the new abuse scandal—not all of them clear yet—must be discussed openly and forthrightly. And in this, our primary concern and loyalty must reside with those who have been victim to sexual predation. Here we, the Church, must show that we have learnt from the scandal of abuse of minors.

In some regions there are cultural pressures which are at odds with the Church’s mandated obligation of celibacy for priests and religious. This raises questions about the suitability of the discipline of celibacy in certain social environments, and calls for an examination of the support given by the Church to priests and religious living in such cultural contexts. For most Catholics, the public emergence of a new scandal will be exhausting. How much more can we take?

For most Catholics, the public emergence of a new scandal will be exhausting. How much more can we take?

The faithful will need guidance from their bishops, and the assurance that steps are being taken to root out this evil in our Church — as a few have already done.

The People of God can also help themselves by keeping in mind this basic truth: we are not Catholics because of the men who are leading the Church, but because we believe in the Creed — which no human evil can diminish.

The Victory of the Cross Over Death

A New Leader for a Diocese of Few Bishops
Share