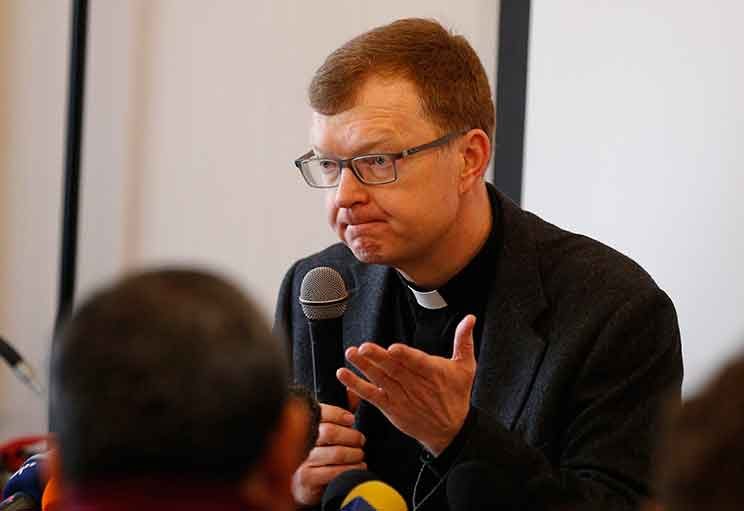 Jesuit Father Hans Zollner, a professor of psychology and president of the Centre for Child Protection at the Pontifical Gregorian University in Rome, leads a briefing for journalists in Rome, 2019. The briefing was to prepare for the Feb. 21-24 Vatican meeting on the protection of minors in the church. Father Zollner is on the organising committee for the meeting. (CNS photo/Paul Haring)

All eyes and ears will be on the Vatican during an unprecedented gathering on Feb. 21-24 to discuss the protection of minors in the Catholic Church.

When Pope Francis announced the international meeting in September, it sparked an optimistic note that the global problem of abuse finally would be tackled with a concerted, coordinated, global effort.

The breadth of the potential impact seemed to be reflected in the list of those convoked to the meeting: the presidents of all the world’s bishops’ conferences, the heads of the Eastern Catholic churches, representatives of the leadership groups of men’s and women’s religious orders and the heads of major Vatican offices.

But the pope tried to dial down what he saw as “inflated expectations” for the meeting, telling reporters in January that “the problem of abuse will continue. It’s a human problem” that exists everywhere.

Many survivors and experts, too, have cautioned that it was unrealistic to assume such a brief meeting could deliver a panacea for abuse and its cover-up.

So, what should people expect from the four-day meeting? The following five points hit the highlights:

To make that point clear, the organizing committee asked every participating bishop to sit down with a survivor of abuse before coming to Rome and hear that “Me, too,” from a person of his own country, culture and language.

Jesuit Father Federico Lombardi, who is moderating the meeting, said there would be between 160 and 180 participants. He told reporters Feb. 12 to expect the presidents of about 115 bishops’ conferences, a dozen heads of Eastern churches, prefects of Vatican congregations directly involved with Vatican norms regarding abuse and negligence, eight delegates from the men’s Union of Superiors General, 10 delegates from the women’s International Union of Superiors General, three members of the pope’s Council of Cardinals who are not presidents of their bishops’ conference and four members of the organizing committee.

Everyone invited will be expected to learn what his or her responsibilities are as a leader or a bishop and to know the church laws and procedures that already exist to protect the young.

Hearing what abuse and negligence have done to people has the power to transform the listener, “to truly open the mind and heart,” Jesuit Father Hans Zollner told reporters.

Just to be sure those voices are heard, the meeting will also feature testimonies from survivors from countries where the reality of abuse is still largely ignored, said the priest, an abuse expert who is part of the meeting’s organizing committee.

He said the word “accountability” doesn’t even exist in many languages, which often means that culture might lack a clear or coherent understanding of this key concept.

For that reason, the summit will devote a day to discussing accountability and “what structures, procedures and methods are effective” and viable in the Catholic Church, he said.

Church leaders must know what the norms are, he said, but the meeting also will stress that the procedures themselves “will not magically solve a problem.”

For example, he said, it was “a source of delusion” for U.S. Catholics when the 2002 Dallas Charter did not fix everything.

In fact, the meeting will not be about producing any documents, but pushing people to take the needed steps toward greater transparency and accountability, Father Lombardi said.

Those steps already are spelled out, he said, in Pope Francis’ 2016 document, “As a Loving Mother,” on the accountability of bishops and religious superiors.

“It must be put into practice effectively,” he said, adding that he was “convinced and firmly hope that this meeting will give a push in that direction.”

A variety of events are planned, including an evening “Vigil for Justice” near the Vatican and a “March for Zero Tolerance” to St. Peter’s Square, but a major focus will be media outreach and getting the voice and recommendations of laypeople and victims — many who had gone unheard for years — listened to.

In letters to the bishops of Chile and the United States, Pope Francis has made clear what he thinks the church needs to do to respond to the abuse crisis.

Administrative solutions involving new policies and norms are not enough, he has said.

He told Chile’s bishops that abuse and its cover-up “are indicators that something is bad in the church body.”

Therefore, they must not only “address the concrete cases,” but also “discover the dynamics that made it possible for such attitudes and evils to occur.”

Those attitudes are driven by the temptation “to save ourselves, to save our reputation,” he told the Chilean bishops.

In his letter to the U.S. bishops, he warned against the tendency to play the victim, to scold, discredit, disparage others and point fingers.

Further measures will be taken after the meeting, Father Zollner has said. For instance, a task force made up of child protection experts “will probably be instituted in the various continents” to help bishops create, strengthen and implement guidelines.

The different “teams” of the task force should be able to help “for years to come to measure the success of this exercise of realising one’s own responsibility, even on the global level, in the face of public expectations,” he told the Vatican newspaper in January.

Even though the church is well aware of larger, related problems of abuses of power, conscience and abuse and violence against seminarians, religious women and other adults, the meeting will focus exclusively on protecting minors from abuse, Fathers Zollner and Lombardi said.

The idea is that the attitude and spirit needed to protect the most vulnerable of the church’s members are the same that will protect and promote respect for the integrity and dignity of everyone.

In fact, Father Lombardi said, “I see this as a test of the profundity of the reform” of the church called for by Pope Francis.

In other words, the pope wants people “to examine how we live out our mission, with what coherence and how we can convert our attitudes, both in regard to our attention and compassion for those who suffer, as well as our consistent witness to the dignity of children, of women, and so on.” – By Carol Glatz Catholic News Service