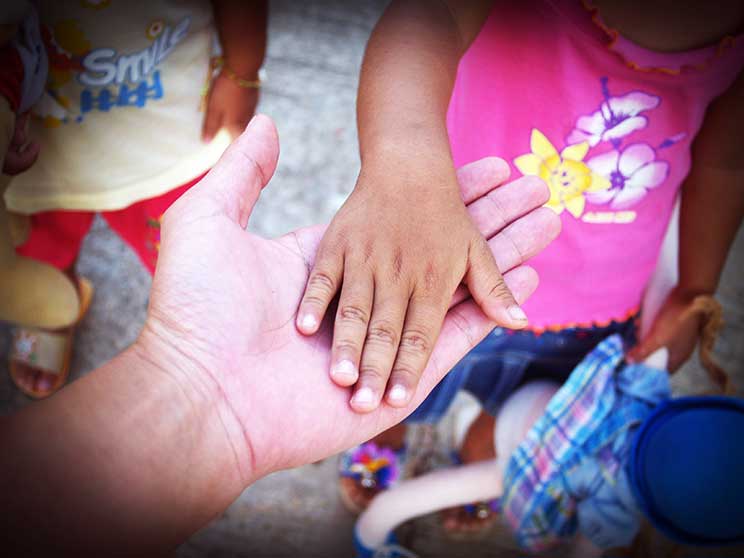 This month is dedicated to grandparents because of the July 26 feast day of Ss Joachim and Ann, Jesus’ grandparents.

Working with family themes month by month has been quite useful for me to reflect more deeply on the domestic church, or the little church of the home, on how God is present in different types of family realities.

June was youth month and the “Thoughts for the Day” that I slave over every month used quotations from Pope Francis’ apostolic exhortation after the Youth Synod, titled Christus Vivit.

Christus Vivit is very inspirational, aimed at the youth who expressed how often they feel that they don’t really belong.

July’s daily thoughts pick up the theme of “Grandparents Matter”, which is used each year because of the feast day of Ss Joachim and Ann, the grandparents of Jesus.

When we look at God, religion and the Church with family eyes, our thinking and spirituality becomes more contextual. This was very obvious for me personally during the past few weeks.

Forty years ago, my late husband Chris and I experienced our first Marriage Encounter weekend. It was an amazing and challenging life-changing experience which led to a new way of being and seeing the Church.

At first in our ministry, we focused on marriage and worked especially in marriage preparation while becoming steeped in the theology and spirituality of marriage. However, gradually we came to be more conscious that there is more than marriage when we look at the family as the domestic church.

This was around 1994, at the time of the First African Synod with its image of Church as Family of God. We recognised a spirituality of parenthood, of motherhood and fatherhood and, as I have discovered in the past 20 years since Chris’ death (which I also commemorated in the last weeks), there is a particular spirituality of widowhood too. That could also apply to divorced people, though somewhat differently.

In the last century there have been great changes in thinking of who and what the Church is. The focus had been strongly clerical, on hierarchy and clergy; but with Vatican II the laity and their role began to feature more. Women, especially women religious, have been working hard to be recognised and play a more significant role.

Marriage featured in the apostolic constitution Gaudium et Spes in an important section, and marriage movements also began to appear in the universal Church.

I shall be arriving at the ripe old age of 75 this month, and all these years have exposed me to many types of family situations: personally, in my extended family, and through my many years of working in family ministry.

I suppose there are not many more family realities I could face, but do I feel that I have “arrived”, in my life and my work of promoting the family focus? Not yet.

It does still bother me that laity, women, youth, fathers, and so on appear to be seen in isolation. For me the Church is not about clergy and laity, or men and women, but all of these people are living in a context which begins the day they are born — or even pre-born — in intimate relationships, family relationships of one kind or another.

From a religious perspective, they mirror the Trinity, the perfect community of love. Pope Francis does make reference to this in his document of the family, In Amoris Laetitia, but I believe this aspect of our Catholic theology is sadly underdeveloped.

Over the past few weeks I have been thinking up “Thoughts for the Day” for and about grandparents for July. The See-Judge-Act method is used, linked with the readings of the day. I decided to use the Old Testament Genesis and Exodus accounts, of the patriarchs and Moses. A little life situation is used and a quote from Pope Francis added.

For example, the “Thoughts for the Day” on July 15 reads:

“When will I be able to retire in peace?” the old lady thought. “I’ve been working for 40 years and now I still have to work to look after my daughter’s children. She chooses to leave them with me and goes off to work, drinks after work, parties at weekend. Is that fair? I do feel exploited but do I really have a choice?”

Scripture: The Egyptians were in dread of the sons of Israel. So they made the people serve with rigour and made their lives bitter with hard service. They set taskmasters over them to afflict them with heavy burdens (Exodus 1:8-22).

Pope Francis: “Jesus was born into a modest family that soon had to flee to a foreign land. He knows the anxieties and tensions experienced by families and weaves them into his parables” (Amoris Laetitia, 21).

This might be a new way of seeing and being Church that is closely related to our daily lives. Hopefully, as family members read and share — ideally with one another — it could bring them closer to God and to one another. That is my dream and I believe God’s too.

Visit www.marfam.org.za to learn more about these daily thoughts.