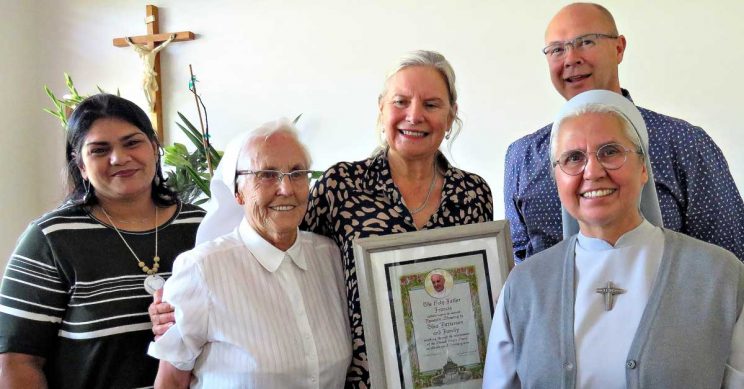 After 52 years in South Africa, the former provincial superior of the Pallottine Missionary Sisters has returned to Germany.

St Joseph’s Home for chronically ill children in Montana, Cape Town, said a special farewell to the much-loved Sr Annemarie Niehsen SAC, who served for many years on the home’s board and represented it at fundraising meetings and events.

Sr Annemarie was due to leave South Africa in 2010, but she stayed on for another ten years. Sr Izabela Swierad, the Pallottine Sisters’ superior general in Rome, referred to her as the “hero of the day”.

“We started building the house [St Joseph’s] and knew that the foundation was already there,” Sr Annemarie said, noting the support of the late Archbishop Lawrence Henry and Archbishop Stephen Brislin.

She thanked St Joseph’s director Thea Patterson, who is soon to retire, for her 18 years of service.

“We are here together today and feel part of this special family. History will show your work,” she said.

After entering the Pallottine convent Marienborn in Limburg-an-der-Lahn in Germany in 1958, Sr Annemarie enrolled for nursing studies in 1963 for her professional diploma. In 1968 she was sent to the South African mission in Cape Town to help the Sisters start the new extension of St Joseph’s Sanatorium, now Vincent Pallotti Hospital.

Her responsibilities included planning and managing the operating theatres, and Sr Annemarie enrolled for a postgraduate training diploma in operating theatre technique at Groote Schuur Hospital.

During her later years she started a district practice, treating and visiting patients in their homes after they had been discharged from the Vincent Pallotti Hospital.

After retirement, she continued her calling, giving pastoral support to patients at the hospital.

“I wish you as many blessings from the Lord as you can handle,” Sr Annemarie concluded.