When Faith And Politics Meet 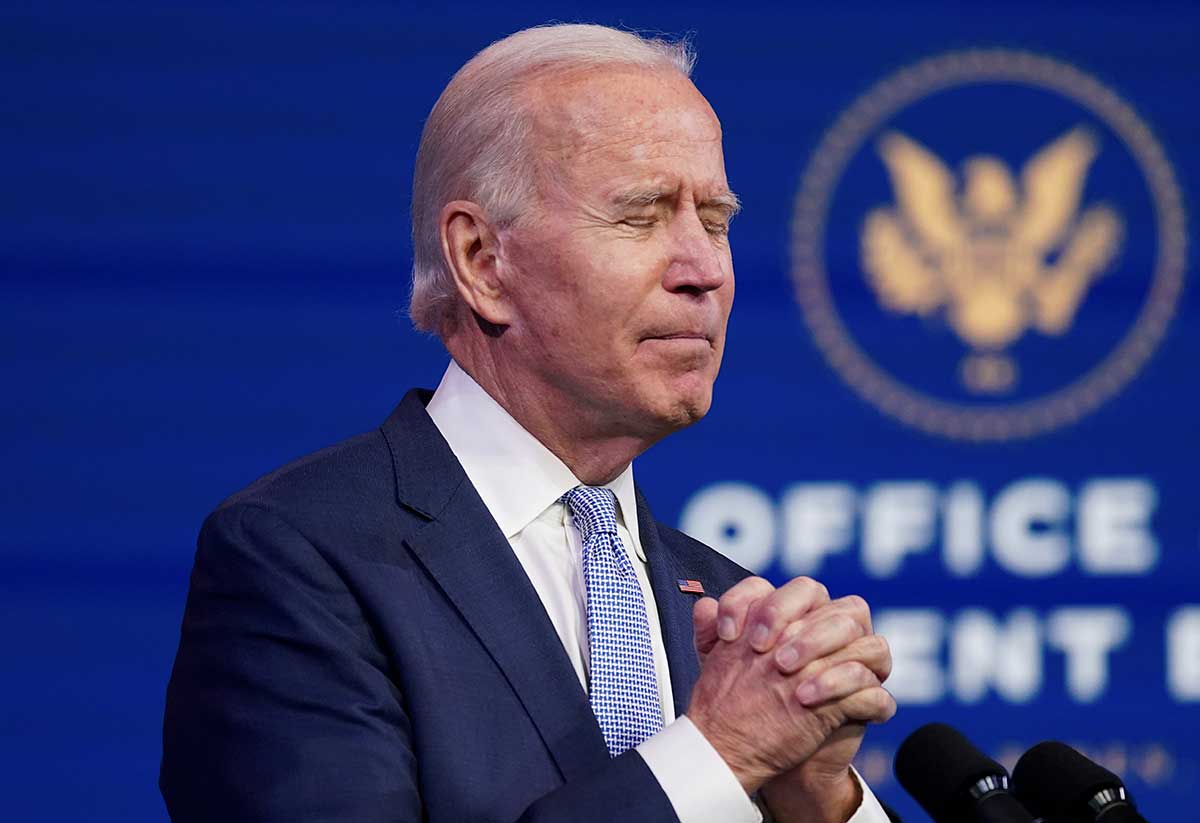 President-elect Joe Biden clasps his hands in prayer position during a news conference at his transition headquarters in Wilmington, Del., Jan. 6, 2021, as he addresses the protests taking place in and around the U.S. Capitol in Washington as the Congress held a joint session to certify the 2020 election results. (CNS photo/Kevin Lamarque, Reuters)

They say that two subjects should always be avoided in polite company: religion and politics. Despite knowing that the readers of this esteemed title are indeed polite company, I clearly breach that rule every month by discussing religion in my column; I am about to do the same with regard to politics.

A new year starts with the inauguration of a new American president — only the second Catholic to hold that position in 244 years and the first since John F Kennedy sixty years ago. And what is more, President-elect Joe Biden is a Catholic with long-standing proof of his commitment to the principles of social justice expounded by popes since Leo XIII’s encyclical Rerum Novarum 130 years ago.

A YouTube clip has been shared extensively in South Africa of Senator Biden in 1986 challenging the Reagan administration’s support for the apartheid regime. In it, Biden describes apartheid as “repugnant and repulsive”. He showed clearly that he was on the side of the oppressed and the marginalised — exactly where the Church calls all of us to place ourselves.

The night of his win, Biden chose to draw on the words of a Catholic hymn known to many of us, “On Eagle’s Wings”. Addressing a nation (and a world) still terrified by the impact of the coronavirus, these words of Michael Joncas, based on Psalm 91 have, had a particular resonance:

You who dwell in the shelter of the Lord / Who abide in His shadow for life / Say to the Lord, “My refuge, my rock in whom I trust!”
And He will raise you up on eagles’ wings / Bear you on the breath of dawn / Make you to shine like the sun / And hold you in the palm of His hand.

Moreover, revelations from the last few years remind us that a pristine baptismal certificate has not been enough to guarantee the virtue even of some of our bishops and priests and sisters (no matter how hard they might have tried to cover this up). So while we might be predisposed towards a Catholic politician, we should of course apply the test of Matthew 7:20: “By their fruits you will know them.” And you remember what the Lord did to the tree that did not produce good fruits…

Applying this test, but on the particular issue of abortion, some Catholics rejected Biden as a bad candidate. This is because Biden supports the Democratic Party’s long-held pro-choice position. Some Catholics have gone so far as to try and “excommunicate” him, saying he is not a “proper Catholic”, or even that he should be refused the sacraments (though they have very poor justification under Canon Law to do so).

Some have actively supported out-going President Trump because of his position against abortion. I leave you to apply for yourself the same test of virtue to Trump: “By his fruits you will know him.”

He pointed out that opposition to abortion or to euthanasia made sense when matched with an opposition to the death penalty or unjust wars, and indeed an active support for healthcare for all those in need. Life is a seamless garment, and so a consistent life ethic is needed which brings together different issues. He commented: “When human life is considered cheap or easily expendable in one area, eventually nothing is held as sacred and all lives are in jeopardy.”

In this context, the Church’s campaigning for the rights of refugees, or its advocacy for health and welfare for the poor, or its understanding of the destructive impact of climate change on the poorest communities are all part of a consistent ethic of life. And the Church should — and does — applaud politicians who are aligned with her on these issues.

For the common good

It is to be hoped that Biden, like all Catholic politicians, reflects on the range of life issues and seeks to promote an ethic of life that, to use another Catholic term, is for “the common good”. But he would always have to do so in the context of the political situation in which he operates: politics after all is, in the words of Otto von Bismarck, “the art of the possible”.

In some ways, not being seen as a placeman for the bishops has been to Biden’s advantage. Sixty years ago some in the American press were anxious that a Catholic president would be a puppet of the Vatican. It is noticeable that this was not an issue during Biden’s campaign. Indeed, when bishops have tried to tell Catholic politicians how they should vote on contentious issues, it has tended to backfire as, for example, in the votes on same-sex marriage in Catholic-majority countries in Europe.

After a time of being suspicious of democracy, the magisterium came to understand that Catholics had an important contribution to make to democratic government, and that they could do so only by participating. Their role — indeed the role of all Catholic lay men and women according to Vatican II’s decree on the laity — is to be “leaven in the dough” (Luke 13:20). If Catholic politicians are suspected by non-Catholics of just being voting machines for bishops or popes, they will not be elected, and so we lose a major opportunity to influence society.

A person’s faith should not predetermine how they will vote on any issue but instead indicate the principles that have formed them and that will inform the way they vote.  I, for one, welcome an occupant of the White House who promises principled leadership, a commitment to the common good, an understanding of the needs of the poor, respect for women and people of colour, transparency and honesty, and a set of values consistent with Catholic Social Teaching.

Plus, I have to admit that him sharing my faith tradition and my love of the music of the St Louis Jesuits is an added bonus.