Nobody is Created Without Purpose 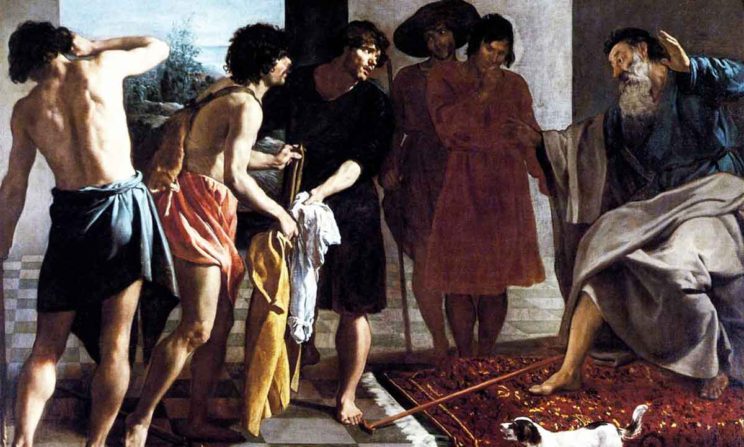 Josephs bloody coat brought to Jacob by Diego Velazquez. Joseph, like Abraham and Moses shows that everybody is created for a purpose, writes Emmanuel Ngara.

In the last three columns we looked at three biblical figures as leaders: Abraham, Joseph and Moses.

A close look at the story of these three figures will show how, when connected together, their stories become the story of the rise, development and establishment of Ancient Israel as a people and a nation, with each of these figures playing a specific role in the development that unfolds.

At the beginning of the story, God tells Abram (whom he subsequently renames Abraham): “Leave your country, your people and your father’s household and go to the land I will show you. I will make you into a great nation and I will bless you” (Gen 12:1-2).

You were born in a particular society at a particular point in time for a purpose.A few chapters later the Lord makes a covenant with Abram, and also tells him: “Know for certain that your descendants will be strangers in a country not their own, and they will be enslaved and mistreated 400 years…In the fourth generation your descendants will come back here” (Gen 15:13-16).

The day when Pharaoh decided to release the Israelites and let them go, the children of Israel had been in Egypt for 430 years: “Now the length of time the Israelite people lived in Egypt was 430 years. At the end of 430 years, to the very day, all the Lord’s divisions left Egypt” (Ex 12:40-41).

Now, what is the place and role of Joseph in all this? Joseph was a great-grandson of Abraham for he was a son of Jacob (whom God renamed Israel), the son of Isaac, Abraham’s son of the promise. Joseph, “the dreamer”, was responsible for the migration of Jacob and his family from Canaan to Egypt.

His brothers thought they were punishing him by selling him to the Ishmaelites, but he became the saviour of the family during the seven years of drought that devastated the whole region.

As he said to his brothers, “You intended to harm me, but God intended it for good to accomplish what is now being done, the saving of many lives” (Gen 50:20).

Despite the glory he enjoyed in Egypt, Joseph was a great patriot and a faithful servant of the Lord.

There are many lessons we can learn from this story, but I would like us to focus on this one aspect: No one is created to play no role in his or her society. You were born in a particular society at a particular point in time for a purpose.

We may not be as great leaders as Abraham, Joseph and Moses were; but God has called each one of us for a purpose — to serve our family, our country or our Church.

The challenge is to pray that we may discover that purpose, and serve God and humanity as faithfully as these three Biblical figures did.