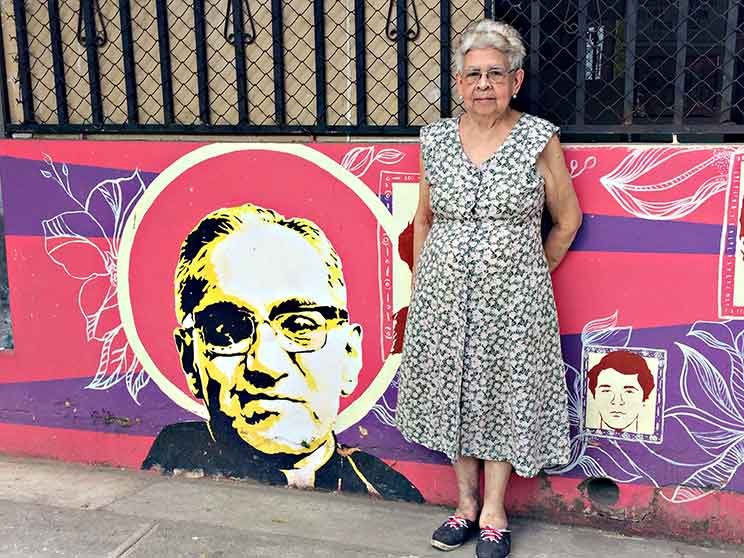 Leonor Chacón stands outside the small family restaurant in Santa Tecla, El Salvador, that she has turned into a shrine to St Óscar Romero. He used to treat the place as a refuge from the growing tension of his pastoral life. (Photo: Jo Tuckman/CNS)

By Jo Tuckman – Leonor Chacón remembers every emotion she felt on March 24, 1980, as if it were yesterday.

It started, she recalls, with the happiness that always accompanied the expectation that Archbishop Óscar Romero of San Salvador would be coming to eat with her family in the small city of Santa Tecla, west of the Salvadoran capital.

Later there was her disappointment when the archbishop could not make it because he was committed to celebrating Mass that evening in the chapel of the cancer hospital next to where he lived.

And then there was the call informing her he had been shot while celebrating that Mass.

“I ran to the room where my husband was and we cried together,” recalled Chacón, now 80. “It was a very great pain.”

El Salvador was overjoyed at the canonisation of the archbishop who began his pastoral life as a conservative priest known for his charity work and spent his final years accused of being a communist agitator for defiantly speaking out against the death squads and political repression.

But while Ms Chacón celebrates the attention focused on St Romero’s message of peace, he was also a dear friend who treated her little family restaurant and home behind it as a refuge from the horror.

Taking a break from making pastries she sells in glass jars on the counter of the restaurant, Ms Chacón let the anecdotes flow.

She recalled the way he would ask to be told jokes, as well as his belly laughs from the sofa when the family would clown about. She smiled fondly at the memory of the time he spent hours sitting with her father, watching telenovelas — the Latin American soapies — and at his voracious appetite for her refried beans.

“He used to say that he came here to disconnect and rest,” she said. “He would say it was like going to the house of Martha and Mary of Bethany.”

Ms Chacón first met Romero on her wedding day in 1963. Her fiancé, Raúl, had told her about the priest who had taken him in to live in his parish in the nearby town of San Miguel when he became an orphan at the age of seven, so she wrote to ask him if he would marry them.

Romero did marry them and stayed for the small banquet the family threw for the newlyweds, then he whisked them off to a hotel for their wedding night, paying the bill himself.

From then on, Romero began regularly dropping by for lunch on his way to and from the capital, developing individual relationships with many of the family members, including her sister, Elvira, who became his secretary.

Ms Chacón said he preferred not to talk about politics when he visited and would brush off concerns for his safety, as he did the last time she saw him, on March 8, 1980. He dismissed the idea that he should be travelling with someone because he didn’t want to endanger anybody else.

Like many in El Salvador, Ms Chacón said the archbishop wrote his own death sentence in the homily he gave the day before his murder, in which he ordered soldiers to “stop the repression”.

He Was Not Afraid to Die

“He knew they were going to kill him, but he wasn’t afraid,” she said. “He was smiling a lot the last time he came here.”

Ms Chacón recalled the children and old people crying as thousands filed passed his coffin as it lay for five days in the San Salvador basilica. She also described how that grief then turned to fear on the very day of his funeral in the cathedral, when snipers fired on the mourners. Dozens died, many in the stampede to escape.

Listening to the funeral on the radio in her home, she said the transmission cut out soon after the gunfire and screams began.

A few months later, rumours circulated that anybody found with photographs of the archbishop would be killed. Her husband, who died in 2002, wanted to burn their photos, but she refused. Instead she wrapped them in cloth and put them at the bottom of a chest.

Now she has hung those same photographs proudly on the wall in a kind of shrine she shows to anybody who visits.

“He used to say that ‘there are more people who love me than hate me’, and it’s still true,” she said. “The people who come here get all emotional.”—CNS