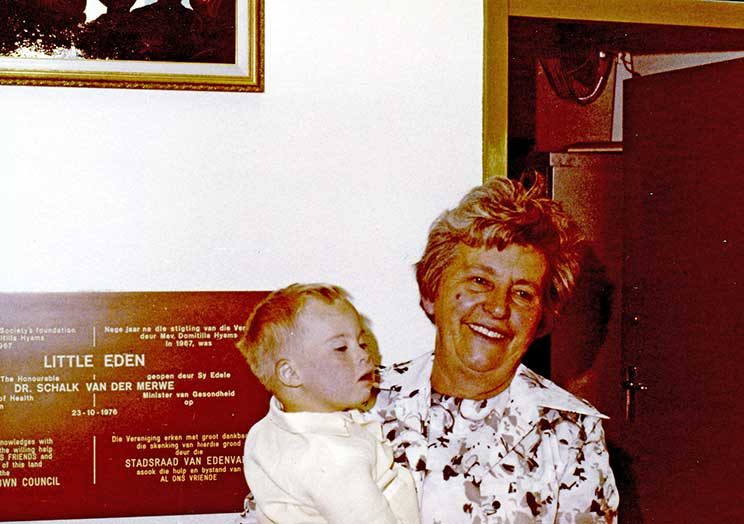 Domitilla with Little Eden resident Matthew at the official opening of the Edenvale home in 1976. (Photos courtesy Little Eden Society)

In part 3 of his four-part series on the lives of Little Eden founders Domitilla and Danny Hyams, Daluxolo Moloantoa looks at the growth of what would be their two families.

In last week’s part 2 of the Domitilla and Danny Hyams Story, the young South African returned to Italy to marry his bride in the small village of Albenza, near Bergamo, on September 7, 1947.

Exactly three months later the newlyweds left Albenza for South Africa. On December 15 they arrived to a warm welcome by the Hyams family.

Soon a baby was on the way. On August 15, 1949, the Hyams couple welcomed their first-born child, Mary Theresa.

A woman of profound faith, Domitilla turned to the Madonna every day in her prayers, and so all the children’s names included the name Mary in her honour.

South Africa in the early 1960s was led by Prime Minister Hendrik Verwoerd, the architect of apartheid. Under his watch, new apartheid laws were introduced, and colonial-style racial classification turned into an all-pervasive ideology affecting all areas of national life.

As a result of such repressive laws, public unrest, riots and strikes started to emerge, followed by arrests, banishments and harsher laws. So it was not surprising that during the family’s 1965 trip to Italy—a few days after the passing of Domitilla’s mother Elvira—and at the exhortations of Domitilla’s relatives, Danny was seriously considering settling there permanently with his family.

Message from an inner voice

Domitilla, however, had the last word. She later recounted that during their stay and while on a short walk through the forests, and down a mountain path to “Grumello”, the house in Albenza in which she was born, she became aware of a strong message, an inner voice. It told her that there was much work to be done in Africa.

Later she would remember that this voice appeared to be that of her mother. Domitilla did not at the time understand the exact meaning of those words, but the die was cast: the family returned to South Africa.

Sometime during May 1956 Domitilla wrote: “The moment has come when I can express my ideas, my intentions, which have tormented me since I was a child: to be of help to Africa.

“During this time, I discussed this with the authority, and the answer was pray, pray, and if it’s God’s will your desires will be realised. But we must plan for the future, to visit the sick in hospitals, clinics, private homes, the aged, the invalids, the abandoned. To gather children off the streets, so that they may return to their light-hearted innocence. To encourage adolescents to enjoy themselves in acknowledging true virtue and beauty. To visit prisoners bringing them the word of God.

“To start, we must build these projects on solid ground.”

The seed was planted. Being a woman of tremendous faith, Domitilla had initiated the formation of a small group of housewives named the “Angels of Mercy”, who would meet and pray the Rosary, and discuss the work to be done.

Domitilla wrote in her diary: “The sudden death of my adorable mother opened the doors to my soul. I feel a strong drive to do good. This loss has worked on my soul; a great suffering that wounded me gravely, but reinforced my desire to help those who suffer.

“Mother was a saint, an apostle, a martyr. Her life of sorrow, tears and virtue is the life I also must follow. My burning tears found favour in the heart of Jesus, and now will blossom into many flowers.” 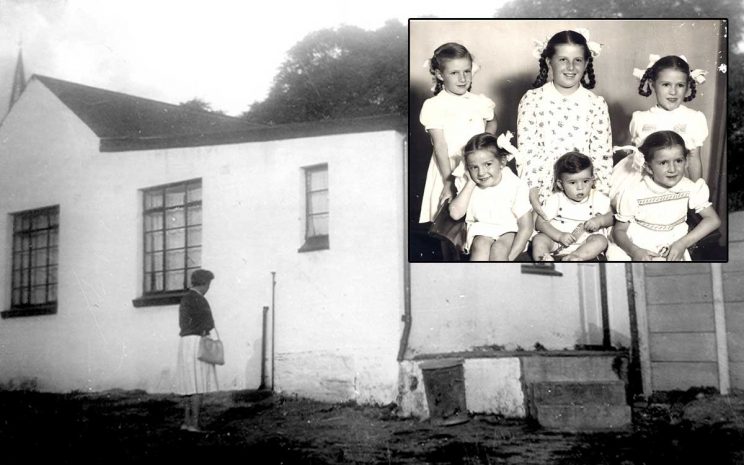 Domitilla inspects what would become Little Eden’s first part-time premises, in a room at the Methodist church in Edenvale, Johannesburg. (Inset) The Hyams children in the late 1950s. (Back from left) Veronica, Mary and Elizabeth, and (front from left) Agnes, Tarcisio and Lucy.

The genesis of Little Eden

Part of Domitilla’s drive to do good was to visit the sick. However, when she was prohibited by her parish priest from visiting bedridden males in hospitals, she was greatly disappointed, but complied with the instruction.

She noted: “From this disappointment Jesus rewarded me with the idea to create a hospice for the needy.”

This is the first reference to the idea of establishing a home for the needy, and which would culminate in the establishment of the Little Eden Society six months later, in 1967.

She later told The Southern Cross: “I first started with a Rosary prayer group in my home in Edenvale. One of the participants had a handicapped child whom she always brought along. I felt a great stirring within me to help the woman and her child”.

Within a short period of time, she had enlisted the assistance of Danny, and spoken to various people who could provide financial assistance to begin.

Danny made the first donation of R10. In November 1966, Domitilla organised several meetings with her local parish priest and a number of potential stakeholders.

On February 1, 1967, a meeting took place at the Hyams home with a diverse group of people congregated with a common purpose: to assist handicapped children in their area, and as a consequence assist their families.

The main objective of the meeting was to channel and organise the goodwill and enthusiasm of those present into a worthwhile cause that would receive the recognition of the relevant authorities, and the support of the public.

Domitilla wrote of that first meeting in her diary: “Today is a great day. Our first group of 26 people are all interested in the proposal to create a home to accommodate mentally handicapped children. We met in our house; 10 St Anne Road, Edenvale.

“We talked, discussed and heard new ideas. We decided on the name ‘Little Eden’, because it is what we aim to provide for the children. ‘Prayer and work’ must be our foundation. Thank you Lord.”

Start in a single room

Then followed a series of meetings which led to that Monday, May 15, 1967, when the Little Eden Society officially opened its doors.

The first centre was no more than a single room loaned by the Edenvale Methodist Church. Domitilla wrote in her diary about the day: “Today at 9am we opened the doors to the room loaned to us by the Methodist church.

“We have no means. We have nothing. But let us face the future with confidence. Divine Providence will assist us, and Little Eden will open its doors to more of our less- abled little ones.

“Their mothers will accompany these little angels to Little Eden, where they will pass the days learning to live and play together.

“In the society we live in under apartheid, we must be able to break down the walls of indifference and injustice by caring, loving and, above all, saving disabled children of all races and backgrounds. The children will find love and understanding, and the parents some respite, and us contentment at having given a little of our time.”

Respect, sanctity of life, and love are the values upon which Little Eden was founded.

NEXT WEEK: The expansion of Little Eden and the Hyams’ legacy.