The Southern Cross: A Question of Survival 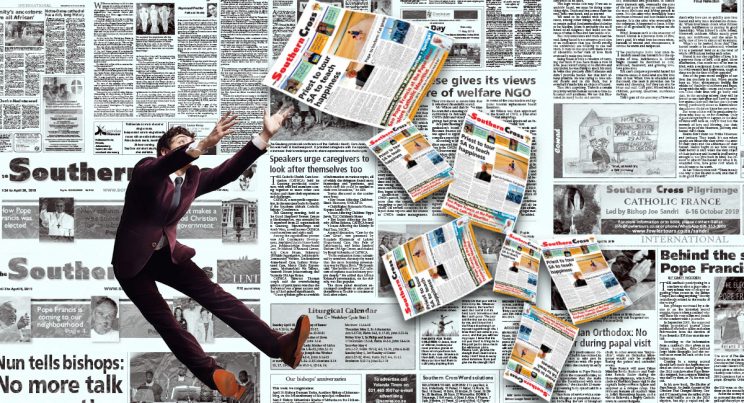 Later this year, The Southern Cross will enter its 100th year of publication, culminating in its centenary in October 2020. That jubilee will be a good time to reflect on a long history of service in the Church’s social communications apostolate.

In close to 100 years, The Southern Cross has not missed a single week’s publication, a consecutive record of more than 5000 weekly editions, through the Great Depression of the 1930s, World War II in the 1940s, and the social upheaval of apartheid after that. It is a record that has few, if any, equals in South Africa.

But there are dark clouds on the horizon and above us. The existence of The Southern Cross in print form is in serious jeopardy—and when the print edition goes, so might its digital presence.

Decades of frugal financial management has kept The Southern Cross alive. But with declining circulation — due to the changing reading culture in society and the economic sabotage of the Post Office, on whom we rely on distribution—and simultaneous increases in the cost of producing the newspaper, The Southern Cross this year has to eat into its reserves to continue publication.

There is little more to squeeze out of the stone to effect cost-cutting measures. The present crisis is so severe that our staff have foregone the annual salary increases in March. It is a sacrifice that testifies to the love the people who produce The Southern Cross have for their newspaper and its mission, which is also the Church’s mission.

It is a love that is shared by the Associates of The Southern Cross, whose generous support over the past 17 years has been crucial in ensuring the newspaper’s survival. Indeed, part of the reserves we now have to eat into are accumulated funds from the Associates Campaign.

It is a sacrifice that testifies to the love the people who produce The Southern Cross have for their newspaper and its mission, which is also the Church’s mission.

But the Associates’ Campaign and sacrifices by our staff alone are not enough to safeguard the future of The Southern Cross. The lifeblood of a newspaper is its circulation and advertising.

By virtue of its web and social media presence, The Southern Cross has many more readers than just its print circulation, but the digital presence cannot sustain the newspaper. It is the readership of the print and digital editions and the advertisers that keep the publication going every week.

The answer to securing the future of South Africa’s only national Catholic weekly is to promote it in the parishes.

If every parish in South Africa were to increase the number of parishioners who read The Southern Cross by five or ten people, there would be no need to increase the cover price, as we have to do as of next week, and no need for editorials such as the one you are reading now. Why do most Catholics not make use of a newspaper which helps them grow in understanding of their faith?

The threat to The Southern Cross is not hostility to it but plain indifference — by laity, by priests, and by bishops.

Why do bishops not ask their parishes to proactively promote the national Catholic newspaper, in which they have collectively a 51% ownership? Why do most priests not mention The Southern Cross at Mass? Why do most parishes not have a team of Southern Cross sellers at their doors? Why do most Catholics not make use of a newspaper which helps them grow in understanding of their faith?

The answer is indifference. Should The Southern Cross one day go under, its gravestone may read “Killed by indifference”.

What would it say about the local Catholic Church if it doesn’t have a Catholic weekly anymore? South Africa would be one of the very few major countries in the world where the Catholic Church would not have a national media presence. That would be embarrassing. The answer is indifference. Should The Southern Cross one day go under, its gravestone may read “Killed by indifference”.

So, what is to be done? The Southern Cross has never asked the bishops’ conference to bail it  out, and it is not our desire to ever do so—much as we are aware that it might be exactly because we never ask them for help that the bishops are oblivious to the crises we face.

But we do need the support of our bishops!

The promotion of The Southern Cross, and all Catholic media, must become an urgent priority before these Catholic media outlets cease to exist.

The bishops, in conference and in their dioceses, must act now.

One way would be to instruct all parishes with the capacity to do so to actively promote The Southern Cross, especially to introduce the newspaper to Catholics who don’t yet know it.

In the medium-term, bishops might form diocesan social communications committees tasked with raising media awareness in the parishes, and help promote Catholic media throughout their dioceses.

Priests can help by increasing their parish’s order of The Southern Cross, and promoting the newspaper every week from the pulpit. One good way of doing so is by mentioning an interesting item or two in that week’s edition. Even a reference to the “Church Chuckle” might do the trick. The promotion of The Southern Cross, and all Catholic media, must become an urgent priority before these Catholic media outlets cease to exist.

Parish councils can help by making The Southern Cross as visible as possible in the parish. The presence of people standing at the door to sell the newspaper assures better visibility than sticking the week’s edition in a corner of a crowded lobby.

Parishes could also form social communications groups, to promote Catholic media and perhaps its own community’s activities in a coordinated way.

Laypeople might sponsor issues of The Southern Cross for distribution to the housebound, patients in hospitals, residents in homes, to the local school library and other places where such reading material would be welcome and useful.

Business people could place advertisements to support us, as some are already doing, or perhaps sponsor an ad for a charity of their choice.

There must be many other ideas and experiences of promoting The Southern Cross. We would be glad to hear them, and share them with the Catholic community.

And we ask, of course, that you include The Southern Cross in your prayers, that this newspaper may survive by the collective engagement of the Catholic community of Southern Africa.

The Catholic Church in Southern Africa needs The Southern Cross, which represents one of the very few means of uniting a divided local Church.

It cannot be allowed to fade away by indifference. And the time to act to preserve our only Catholic weekly is now.