Thandeka Dube: Singing for St Anne and the World 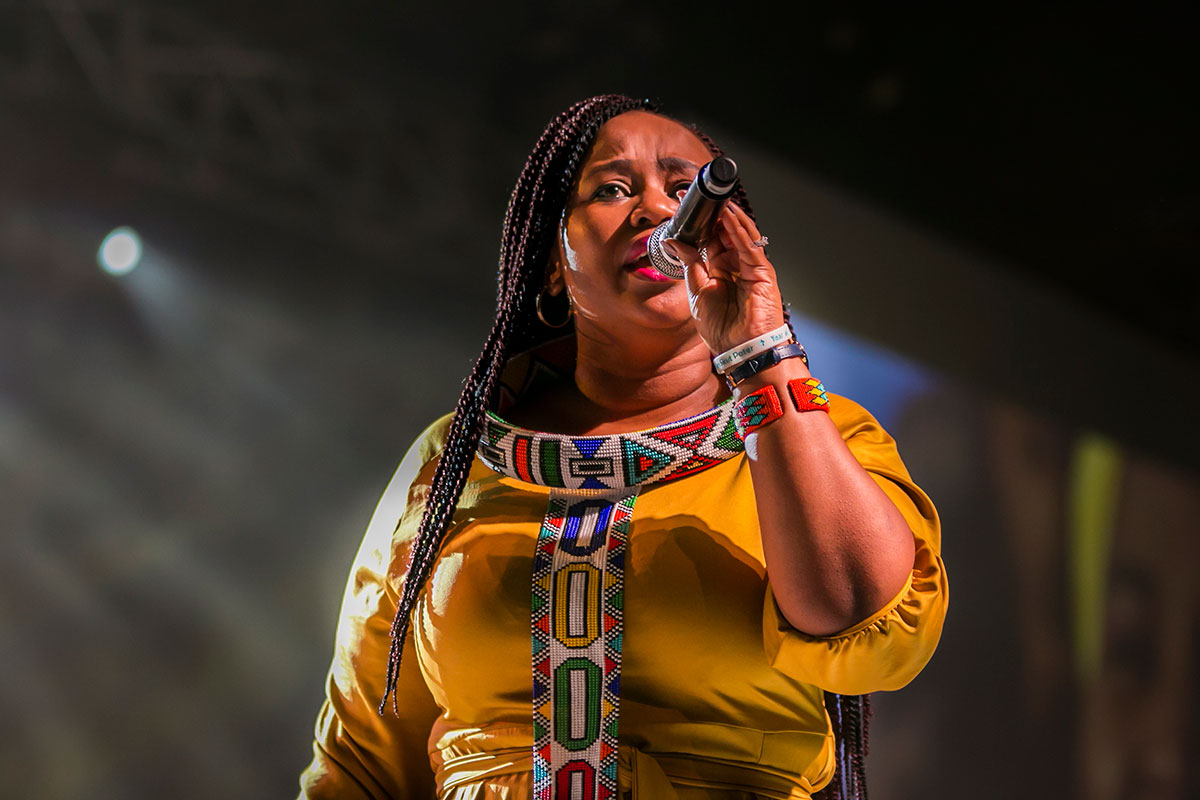 For Catholic gospel singer Thandeka Dube, having national success is as important as being a member of her sodality, as she tells DALUXOLO MOLOANTOA.

The video of “Inkosi Inamandla” (The Lord Holds All Power) is the only one in mainstream South African gospel music to feature members of the “purple brigade” — the St Anne’s Sodality. Aside from her flourishing music career, Durban-based singer Thandeka Dube finds much fulfilment from her membership in the sodality. And this, she believed, had to find expression in the video for her debut single.

“For me, St Anne’s Sodality represents a fulfilling, rewarding, humbling, and happy place. I always look forward to spending time with the ladies. As busy as I may be with other aspects of my life, I do my best to make sure I don’t miss any of my St Anne’s commitments,” Thandeka says. “We pray, laugh, cry and sing together. Most importantly, the work we do in the Church and the communities is comparable to none. Walking away with the knowledge that you’ve helped make someone else’s life a bit more bearable is priceless.”

Thandeka Dube was born in Botha’s Hill, in the Valley of a Thousand Hills, in KwaZulu-Natal. She was raised in Mpumalanga township, between Durban and Pietermaritzburg, where she attended primary school. She attended two Catholic high schools — Albini Girls’ High in Ntshongweni and St Francis College in Mariannhill — before matriculating at a Model C school.

Apart from her music career, Thandeka works in the hospitality industry. She studied at the Durban University of Technology, and is currently in her final year of her studies towards a B.Com degree in human resources management.

Her musical roots are deeply embedded in her family. “My mother sang soprano in most of the big choirs in KwaZulu-Natal, such as the Amazwi KwaZulu Choir, or Zulu National Choir. At 70 years of age, she remains a church choir conductor, and she reads and writes music,” Thandeka says.

Her late uncle, also a member of big choirs in the province, started a family choir many years ago. “It was made up of immediate family, cousins, aunts, and so on. We used to practise choral music after work or school,” she says. “We no longer practise as a choir as life’s demands made it challenging for us to keep going. However, up to this day, each and every one of our family’s gatherings ends up in song, whether planned or not.”

Thandeka is also a member of the St Anne’s Sodality Mass Choir. “We sing choral music, isicathamiya and mainstream gospel tracks. Sadly, we have not been able to sing together in a while, due to the pandemic,” she says.

A screenshot of the video of Thandeka Dube’s single “Inkosi Inamandla”, which featured members of the St Anne’s Sodality, to which the singer belongs.

Thandeka has collaborated with a variety of musicians in South Africa, and even internationally. A once-off performance in Dubai opened the doors to her flourishing music career. “When I returned from my performance in Dubai, I was approached by the head of the KZN Philharmonic Orchestra to sing for Durban’s senior citizens at an event organised by the eThekwini Municipality. Since that event, I have been invited a few more times to perform with the orchestra. The last time was in December 2020, when Durban Tourism took the orchestra to the township. The idea was to sing songs which ordinary people identify with, backed by the orchestra,” she explains.

In 2017 Thandeka co-wrote and recorded the theme song for the Mini World Youth Day in Durban. She collaborated on the song with Justin Nanak, a fellow Catholic singer and music producer. “Justin was a member of the presiding committee for the Mini World Youth Day conference. When he was tasked to write the song, he had this idea that it should be bilingual and requested that we write it together in English and IsiZulu,” she recalls. The song, titled “The Mighty One”, was released on July 24, 2017 — two days before the feast day of St Anne.

Thandeka released her debut single, “Inkosi Inamandla” last October. It received airplay on local radio stations, eventually reaching the ears of gospel music lovers on mainstream radio stations such as uKhozi FM and Metro FM. “The song’s performance was totally unexpected, especially coming from someone who was a newcomer to mainstream radio. Since the release I have also had the opportunity to share it onstage with gospel music giants such as Ntokozo Mbambo and Nqubeko Mbatha.”

The idea for the song’s video was Thandeka’s. “I wanted it to be an expression of who I am. Hence you’ll see my family, my fellow church members, especially my fellow St Anne’s ladies, and others. These are basically the people that make up who I am. Even my aunt’s dog landed up in a scene,” she says.

“However, for this same reason we received a mixed reaction to it. Some television executive felt that the video was not good enough for their channels. I was asked to make some changes to it. I decided to let it stand as it was because it represents who I am and what makes me. If that means the video is not played on television networks, then so be it. The fact remains, it will always be around to tell my story,” Thandeka asserts.

Her second single, “Nguwe Olithemba” (In You I Trust) was released in February, and has been nominated for this year’s Independent National Gospel Music Awards, the Ingomas. “It received heavy rotation on Metro FM and uKhozi FM for some weeks after its release. It has also attracted streams from countries such as Ghana, Mauritius and the United States. I am filled with gratitude to be receiving so much attention from places so far off the beaten track for South African gospel music.”

Recently Thandeka recorded a theme song for the Southern African Union of Catholic Women’s Organisations (SAUWCO) with Mam J (Joana Khumalo), a fellow Durban-based Catholic musician and member of St Anne’s Sodality. In future, she would like to work with other rising Catholic music artists such as The Light Twins, Thulasizwe Ndlovu and Thuso Wa Sabini. Like those musicians — all of whom have been featured previously in The Southern Cross — she believes that Catholic music artists have to look within and receive support from the Church first before branching out into the mainstream gospel music scene. “I have enjoyed tremendous support from Radio Veritas. In fact, all of my singles were launched on Radio Veritas.”

Yet, Thandeka adds, more could be done to provide a platform for budding music artists within the Church. “If you consider that the Church holds a large proportion of Christians in South Africa, Catholic gospel artists should probably be among some of the biggest out there. We have to harness our own power as Catholics and get behind music artists who fly the Catholic gospel music flag high on the national scene.”

Like many other musicians, Thandeka believes there are three pillars for success in the music industry: hard work, commitment and dedication. And her advice for budding musicians? “Acquire a qualification. It may prove to be challenging to have a professional career while being a recording artist, but it is worth it. Studying equips one to make well-informed decisions, especially at a time when offers are being put on the table. Your talent will always be there; it will never leave you. It’s education first. The rest will follow.”