What the Pope said to Jesuit Priests

The approach to morality used in “Amoris Laetitia” is the same used in the Catechism of the Catholic Church: They reaffirm general principles while encouraging pastoral care that recognises a person’s personal situation and seeks to lead them to holiness, Pope Francis said. 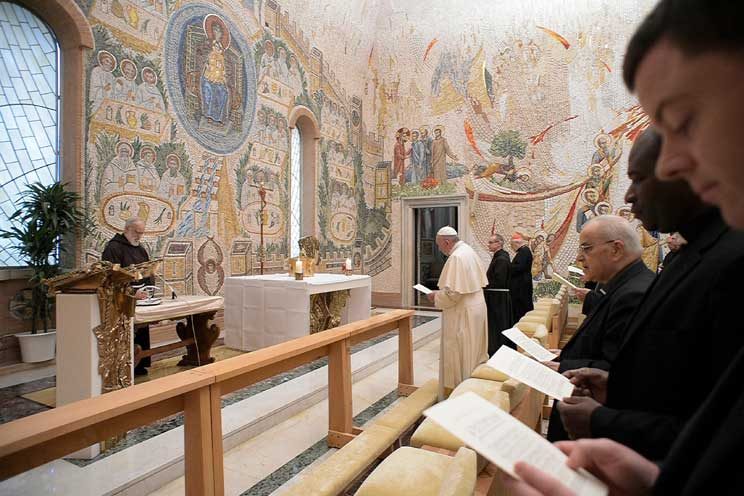 Pope Francis attends an Advent reflection given by Capuchin Franciscan Father Raniero Cantalamessa, preacher of the papal household, in the Redemptoris Mater chapel at the Vatican. (CNS photo/L’Osservatore Romano, handout)

When he was a seminarian, Pope Francis said, “The whole moral sphere was restricted to ‘you can,’ ‘you cannot,’ ‘up to here, yes, but not there.'”

“It was a morality very foreign to discernment,” the pope told members of the Jesuit general congregation in a 90-minute question-and-answer session. The Jesuit journal, La Civilta Cattolica, published a transcript of the exchange.

“Discernment is the key element: the capacity for discernment,” he told the Jesuits in Rome, recalling that in July he had told Jesuits in Poland the same thing, asking them to teach the art of discernment to diocesan seminarians and priests.

“We run the risk of getting used to ‘white or black,’ to that which is legal,” he said. “One thing is clear: today, in a certain number of seminaries, a rigidity that is far from a discernment of situations has been introduced. And that is dangerous, because it can lead us to a conception of morality that has a casuistic sense.”

Pope Francis called for a recovery of moral reasoning after the example of St. Thomas Aquinas and St. Bonaventure, who “affirm that the general principle holds for all but – they say it explicitly – as one moves to the particular, the question becomes diversified and many nuances arise without changing the principle.”

“This scholastic method,” he said, is what is used in the catechism and in “Amoris Laetitia,” his apostolic exhortation on the family and marriage.

“It is evident that, in the field of morality, one must proceed with scientific rigor and with love for the church and discernment,” Pope Francis said.

Calling clericalism “one of the most serious illnesses that the church has,” the pope said it also is a violation of the vow and spirit of poverty. “Clericalism is rich. If it is not rich in money, it is rich in pride.”

Clericalism is at play, he said, when a priest or bishop thinks that a talented, committed and involved layman automatically should be a priest or deacon.

“Clericalism does not allow growth, it does not allow the power of baptism to grow,” the pope said. “The grace and evangelising power of the missionary expression comes from the grace of baptism. And clericalism controls this grace badly and gives rise to dependencies, which sometimes have whole peoples in a state of very great immaturity.”

At the same time, Pope Francis insisted God continues to call young people to the priesthood and religious life, but they need support and encouragement to hear the call.

“If the priest is always in a hurry, if he is involved in a thousand administrative things, if we do not convince ourselves that spiritual direction is not a clerical charism, but a lay charism – which the priest can also develop – and if we do not call upon the laity in vocational discernment, it is evident that we will not have vocations,” he said.

Not devoting time to helping young people discern their vocations is a very serious error, the pope told the Jesuits.

In fact, he said, “not promoting local vocations is suicide, it is directly sterilising a church, the church who is mother. Not promoting vocations is an ecclesial tubal ligation. It does not allow that mother to have her children. And that is serious.”

Asked about the vow of poverty, the pope said that in the view of the Jesuit founder, St. Ignatius, it is “not just an ascetic attitude, as if to pinch me so that it pains me more, but it is a love of poverty as a way of life, as a way of salvation, an ecclesial way.”

For Jesuits, and other religious, “poverty is both mother and bulwark. Poverty nurtures, mothers, generates spiritual life, a life of holiness, apostolic life. And it is a wall, it defends.

“How many ecclesial disasters began because of a lack of poverty,” he said. “How many of the scandals which I, unfortunately, have to find out about, are born of money.” By Cindy Wooden Catholic News Service

This Christmas, recognise your sin and let God caress you

At Christmas, God reveals his full power, which is the power of relentlessly seeking his lost sheep and, when he...