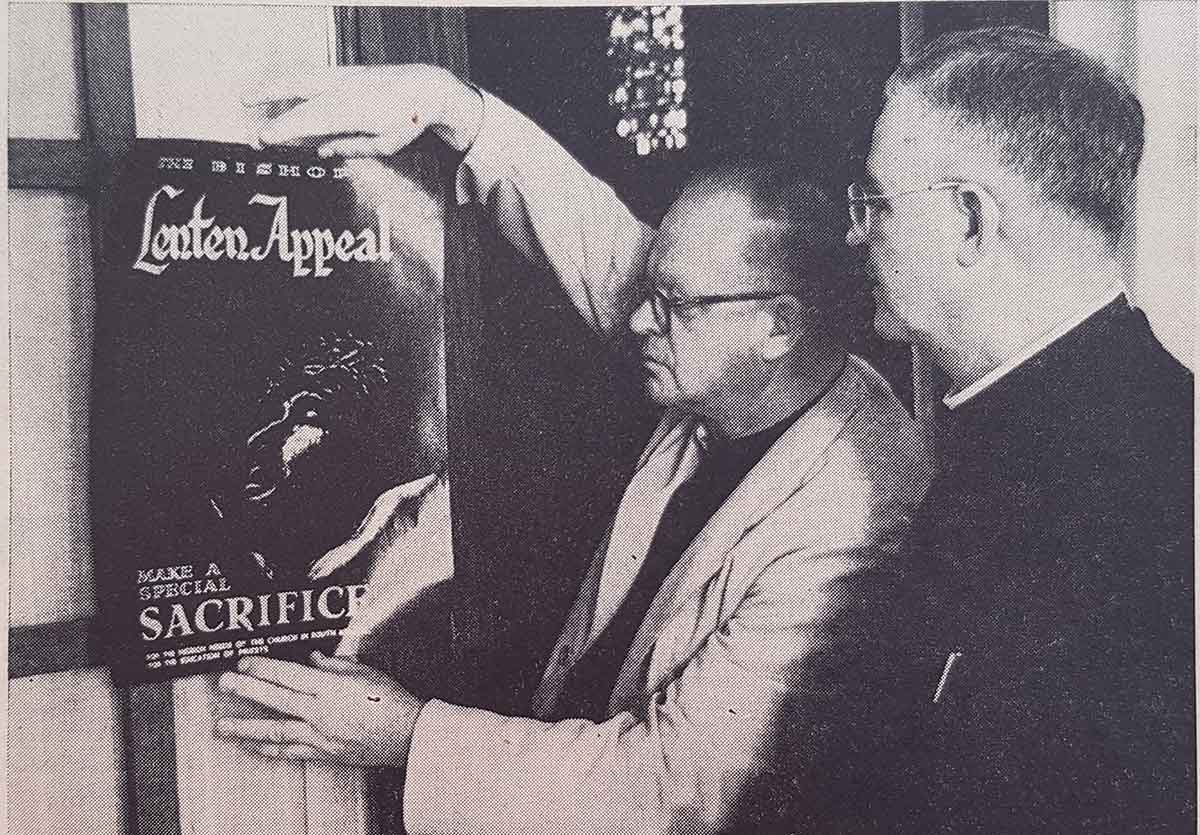 Bishop John Bokenfohr of Kimberley and Fr L Dunkel look at the poster for the first Lenten Appeal campaign in this picture in The Southern Cross of February 16, 1966.

This year’s Lenten Appeal is celebrated as marking the campaign’s 50th birthday. Although the first Lenten Appeal was staged in 1966, that was an experimental campaign, and so 1967 is seen as the official inaugural year.

In those five decades the Bishops’ Lenten Appeal in Southern Africa has raised close to R100 million.

“When I mentioned this to a priest from the archdiocese of Durban recently, he remembered the day he first put something in the mite boxes: ‘I gave my spending of a penny for the Lenten Appeal,’” said Br Ashley Tillek, the national director of the appeal.

“We all remember the day we gave our spending money for this worthwhile cause. As children the mite boxes played an important role; we all wanted to just fill it up — let us pray that this spirit will continue among our children today,” the Franciscan recalled.

Br Tillek pointed out that the Church has worked alongside the poor throughout its history.

“In 1966 the late Cardinal Owen McCann, who was president of the Southern African Catholic Bishops’ Conference (SACBC) at the time, asked for the period of Lent to be the time for penance, fasting, prayer and almsgiving, which we now observe in the word ‘Sacrificium’,” he said.

The bishops’ original intention was to have the Appeal only in 1966, “but when it proved to be so successful they decided to carry on with it annually,” said Fr Kevin Reynolds of Pretoria, a former national director of the campaign.

“The diocese of Johannesburg already had its own diocesan Lenten Appeal for several years before the national campaign got off the ground,” Fr Reynolds noted. 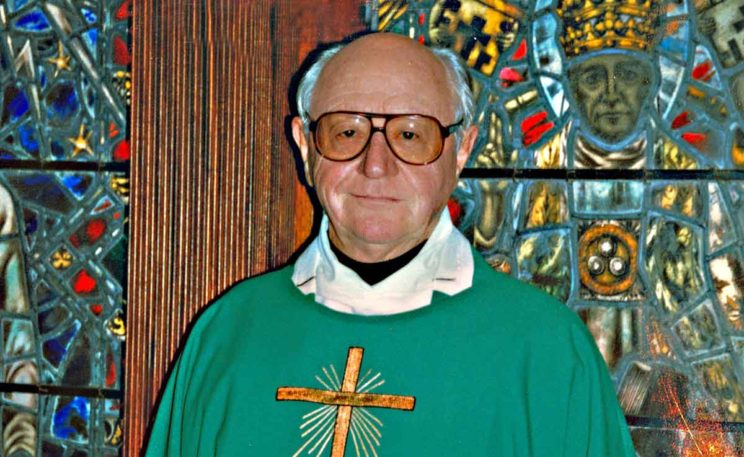 Fr Noel Coughlan OMI of Durban, the first national director of the Bishops’ Lenten Appeal, a position he held for 35 years. He died on January 19, 2009 at the age of 93.

It was Cardinal McCann who commissioned the late Fr Noel Coughlan OMI of Durban as the first national director of the Lenten Appeal.

The role that Fr Coughlan played in building up the campaign cannot be overemphasised, Fr Reynolds said.

“The bishops could not have chosen a better priest to lead their new initiative. Already in 1952 Fr Coughlan had displayed his organisational skills by starting the Durban Passion Play which is still presented every five years. Later he became the founding director of the nationwide theological winter school,” said Fr Reynolds.

Fr Coughlan was sent to Canada to learn how to go about establishing the Appeal.

“Perhaps the best confirmation of Fr Coughlan’s dedication to the Lenten Appeal was his directing it for nearly 35 years. His guiding principle was to ensure that any worthy application for funds was always financially assisted. Hundreds of thousands of people over the years benefited from the way he organised the Appeal every year and distributed its proceeds to their benefit,” Fr Reynolds said.

Fr Reynolds himself was involved in the Lenten Appeal as its Pretoria archdiocesan director for nearly 20 years, up to 2001.

It is exactly 20 years ago that Fr Reynolds, Stephen Docherty of the Cape Town chancery and Fr Barry Reabow SAC of Queenstown were sent by the bishops’ conference to Germany for a week to study the methods used there.

“That initiated quite a radical upgrading of our Lenten Appeal. At that time, Bishop Reg Cawcutt, then auxiliary in Cape Town, was chairman of the bishops’ finance committee. In that position he spearheaded the upgrading of the SA Lenten Appeal,” Fr Reynolds recalled.

“Starting in 1998, we came up with the idea of supplying people with not only the contribution envelopes but also with a pamphlet on the particular year’s campaign.  We introduced an annual theme for the Appeal.  Each Sunday of Lent focused on a particular aspect of the theme,” he said.

“We added ‘kits’ containing contribution envelopes and a newsletter. This had the effect of improving the Appeal’s income. [Now] every year a Lenten Appeal pamphlet continues to be published, giving information on the previous year’s proceeds,” he said.

In the preparation of that material, Fr Reynolds worked closely with Mr Docherty, the editor of Cape Town’s Archdiocesan News, who designed the printed envelopes and pamphlets.

Another innovation came from Fr Coughlan. He substituted the original metal money boxes he had made for the children’s contributions with little cardboard boxes in the shape of a chapel.

“They were, in fact, made by the company that produced 500ml milk cartons. These money boxes went down very well,” said Fr Reynolds. 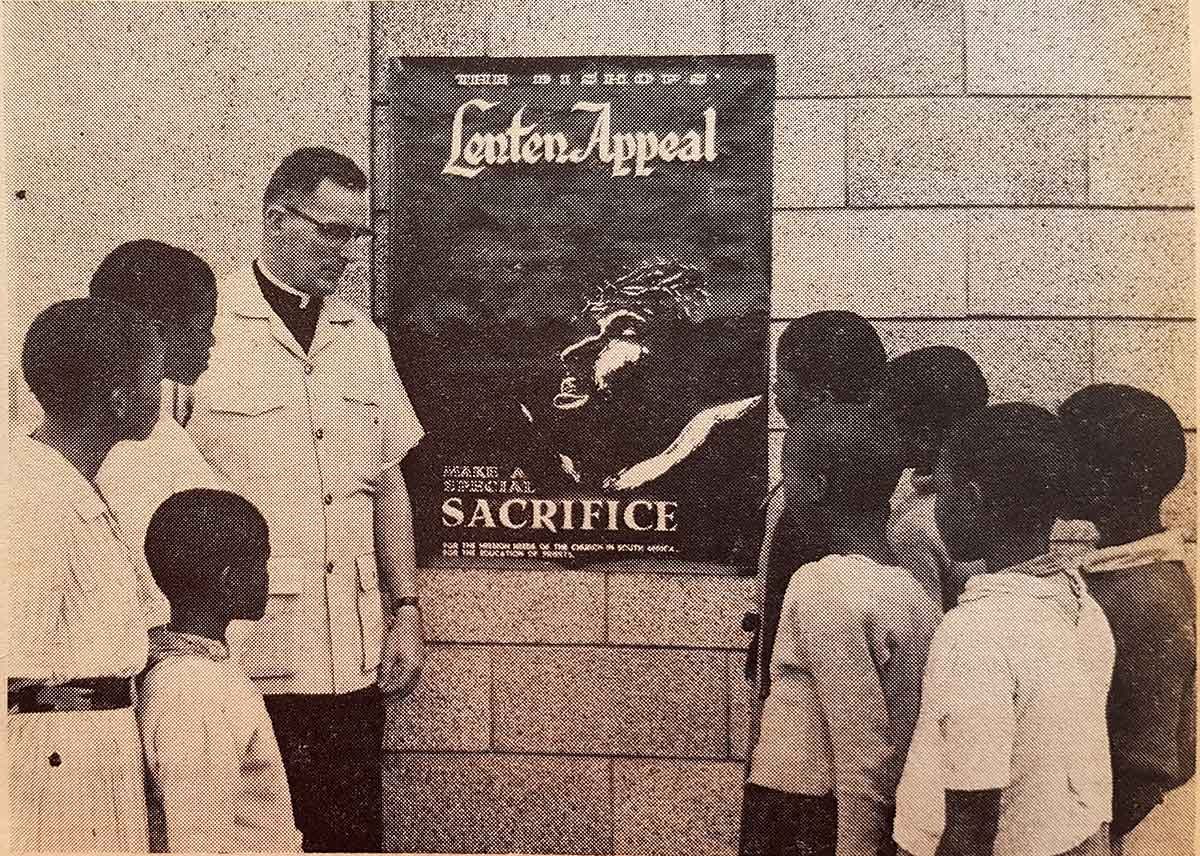 Mgr Edwin Kinch OSM, prefect apostolic of Ingwavuma, explains the meaning of the new Lenten Appeal campaign to young parishioners in this issue of The Southern Cross of March 2, 1966.

How it all works

During the 40 days of Lent — from Ash Wednesday to Holy Thursday — the Catholic Church calls out for sharing and prayer for missions running in the Catholic community.

Collections are channelled to the Lenten Appeal office with the aim that the bishops can approve its distribution to the poor and needy, and to other works of the Church.

The box features the Sacrificium logo, the face of Christ, and a picture of Bl Benedict Daswa.

The collected money is distributed for the support of the total mission of the Church in South Africa, which includes the poor and needy, education, health, priestly and lay formation, peace initiatives, catechetical formation, and ecumenical projects.

“Catholics are called to share with others not only money, but also what they received from God. The Lenten Appeal is an opportunity to live the faith that Catholics profess: to be disciples of Christ and witnesses of his kindness towards them. It is a mutual expression of gratitude,” said Br Tillek.

“Despite these challenging financial times, [last year] we raised a total amount of R9,8 million. Unfortunately this was 3% lower than what we raised last year — just over R10 million. But we continue praying that this will improve because we are aware that the cost of living is a daily challenge for all of us,” Br Tillek said.

He emphasised that the Lenten Appeal “is the primary source of financial support for our local Church’s activities”.

In his message for this year’s Lenten Appeal, SACBC president Archbishop Stephen Brislin said that the campaign is a way to help the local Church become self-sufficient.

“Although we are a young Church — in 2018 we will be celebrating only 200 years of the official establishment of the Church in Southern Africa — nonetheless we need to work much harder to become a self-reliant Church. No longer should we be dependent on other countries for Church personnel or finances,” he said.

“In the spirit of stewardship, knowing that we have been entrusted with the faith in this part of the world and are responsible for the life and work of the Church, we must strive to generously share our resources.”

One such way, the archbishop noted, is through generous support of the Lenten Appeal.

Archbishop Brislin said that few people, even within the Church, are aware of how many programmes are run by the SACBC.

“Taken with the initiatives of dioceses and parishes, thousands of interventions are made which alleviate the suffering of people, bringing them consolation and hope. The Gospel is proclaimed through these good works as well as though specific programmes of evangelisation and catechesis,” he said.

“The Church has provided support in the fields of education, health, development, skills, advocacy and crisis relief. Catechesis, media programmes, small Christian communities, the formation and training of priests and deacons — to name a few — have ensured that there is both the proclamation of the Word and the deepening of the faith.

“All such enterprises have benefited from contributions by the Lenten Appeal,” Archbishop Brislin said.

At the top of the governance structure of the appeal is the plenary, which consists of all the bishops of the SACBC in their summer and winter meetings. The board of directors comprises nine people, including the secretary-general of the SACBC — currently Precious Blood Sister Hermenegild Makoro — and the national director.

Br Tillek urged the faithful to continue giving of their love: “We can see that the monies collected are just not for the works of the Church, but for the poor and needy. The works of the Church are well looked after because this is where the people really need our help, so please during the Lenten Appeal period remember the father, sister, brother and laity  doing these works on your behalf.”

Please e-mail proof of payment to lentenappeal@sacbc.org.za for reference purposes.

One can also contribute to the Lenten Appeal by SMS, with the word “Lent” and the name of your diocese to 40180 (SMSs cost R20)