15. Our Lady of Luján, Argentina 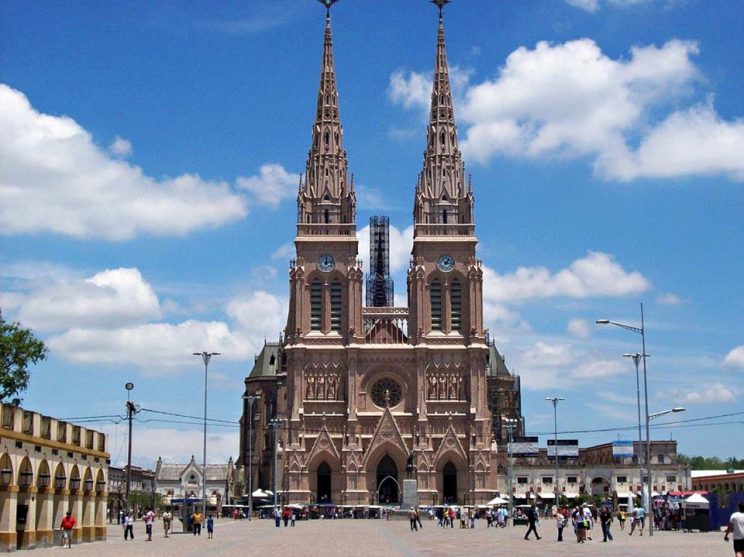 Argentina’s national shrine owes its location at Luján, around 70km from Buenos Aires, to obstinate beasts of burden.

In 1630 a settler was returning from Buenos Aires to his home region where he was going to set up a shrine, with a terracotta statue of Our Lady of the Immaculate Conception from Brazil as its centrepiece. But at present-day Zelaya, the oxen in the caravan refused to move—until a crate containing the image of Our Lady was removed from their load.

This was seen as a sign that Our Lady wanted to remain at that place. The figure was placed in a local chapel where it stayed for 40 years before it was moved to Luján.

Many popes have honoured Our Lady of Luján. One of them was Pope Pius IX, who as Fr Giovanni Maria Mastai-Ferretti made a pilgrimage there in 1824. Thirty years later, as pope, he declared the dogma of the Immaculate Conception.

Pope Pius XII placed Argentina under the protection of Our Lady of Luján, and Pope John Paul II became the first serving pontiff to visit the shrine in 1982—in the midst of the Falklands War.

As archbishop of Buenos Aires, Pope Francis spent many weekends at the shrine to minister to young people. (Photo: Dario Alpern/Commons) 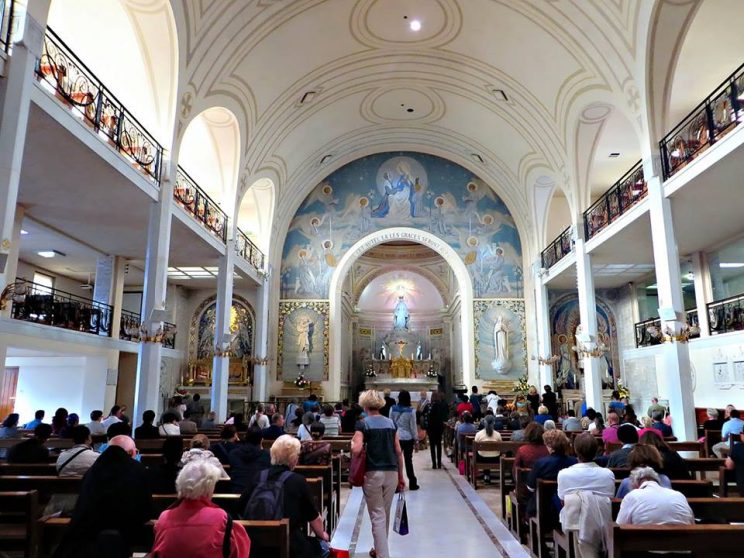 Between July and December 1830, a 24-year-old novice of the Daughters of Charity, Sr Catherine Labouré, reported three apparitions of Our Lady, following earlier visions of Christ and the heart of St Vincent de Paul, co-founder of her order. All took place in the chapel at 140 Rue de Bac in Paris, built in 1813.

In her apparitions, Mary instructed Sr Catherine to have medals struck featuring the image in which the Blessed Virgin appears inside an oval frame, standing upon a globe, with her hands coming out as rays of light—and the invocation: “O Mary, conceived without sin, pray for us who have recourse to thee.”

After some investigation by the archdiocese into Sr Catherine’s claim, this was done. Shortly after, in February 1832, Paris suffered a cholera epidemic which killed 20,000 people. The Daughters of Charity distributed the medals at that time and many survivors attributed their cure to the protection received through it. And so it became known as the Miraculous Medal. It remains a very popular devotion in the Catholic Church worldwide.

The Miraculous Medal chapel, which over the years has undergone several remodels, is a very popular destination for pilgrims in Paris, whose famous cathedral, the Notre-Dame, is, of course, also dedicated to Mary. The Southern Cross pilgrimage to Catholic France in October 2019 will visit the chapel: see www.fowlertours.co.za/sandri (Text & Photo: Günther Simmermacher) 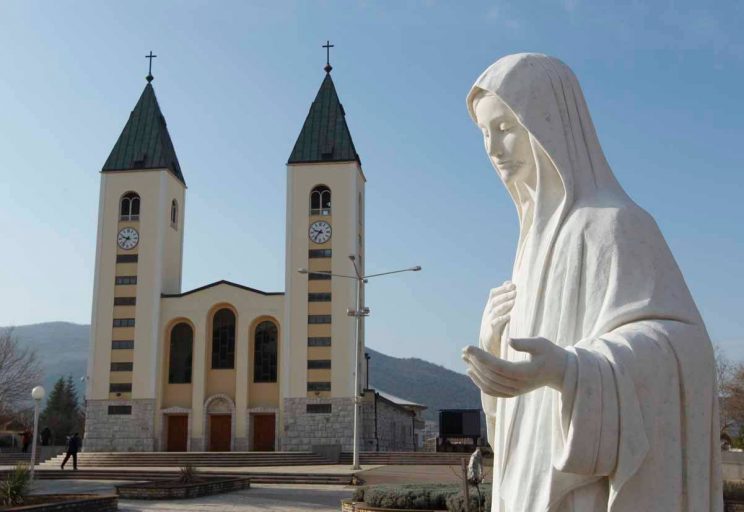 Disapproved of by the local bishops and still awaiting approval by the Vatican, the sanctuary of Medjugorje in Bosnia-Herzegovina is nonetheless a hugely popular pilgrimage destination.

The sanctuary is based on reported apparitions to a group of young people that started in 1981 and are claimed to still go on today. A recent Vatican commission suggests that only the first six apparitions can be said to be credible—which raises the question of what the commission believes the other thousands of claimed apparitions are.

Either way, while Pope Francis has cast doubt on the recurring apparitions there, he has also noted the evidence of Medjugorje’s pastoral and spiritual fruits. (Photo: Paul Haring/CNS) 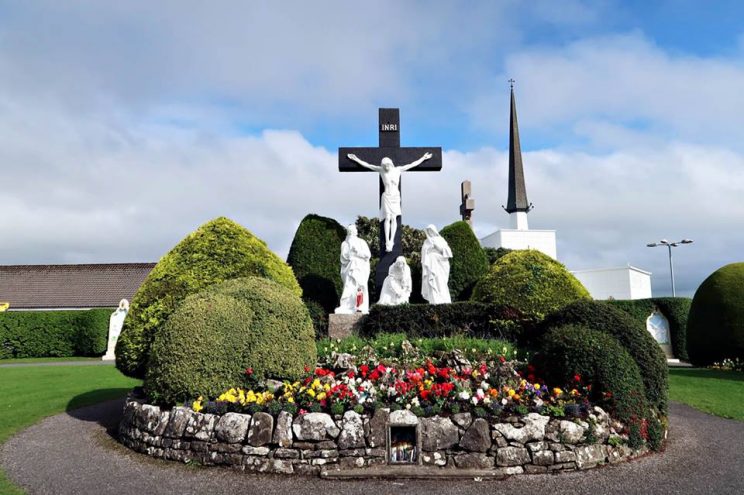 Around 1,5 million people annually visit the shrine of Knock in Ireland’s rural County Mayo—such numbers in small Ireland that an airport was built near the shrine.

On August 21, 1879—at a time of famine and rural strife under the British occupation—at 8pm on a rainy night, Our Lady appeared to 15 people on the gable of the local church of St John the Baptist. They also saw St Joseph, St John the Evangelist, angels and Jesus in the form of the Lamb of God in visions that lasted two hours. Unusually, this was a silent apparition.

A Church commission found that all the testimony of the witnesses was trustworthy and satisfactory. In 1936, a new commission interviewed the last two survivors. They confirmed the testimony received by the first commission.

Many healings are reported at the place known in Gaelic as Cnoc Mhuire (Hill of Mary).

11. Our Lady of Peñafrancia, Philippines 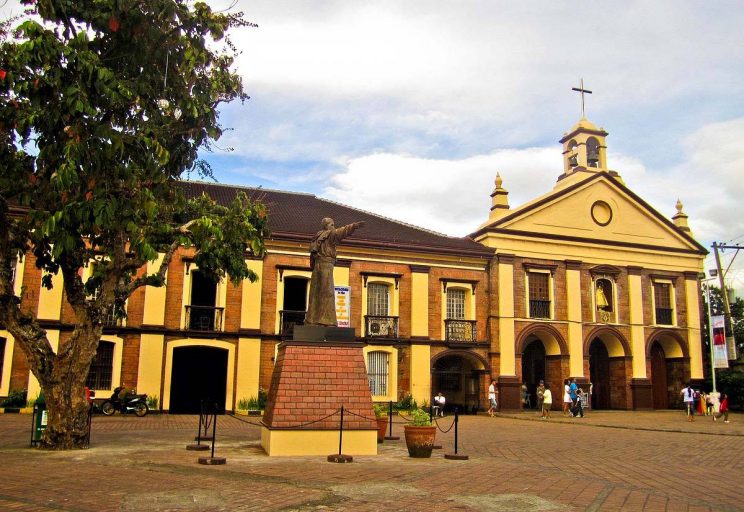 The Marian shrine of Our Lady of Peñafrancia is one of the most popular in all of Asia.

The tradition goes back to 1712 when the son of Spanish officials, a seminarian named Miguel, fell seriously ill. His parents prayed to Our Lady of Peñafrancia—a devotion linked to the veneration of a wooden statue in the Spanish city of Salamanca—while Miguel held an image of her to his chest.

If cured, Miguel promised to build a chapel in honour of Our Lady of Peñafrancia. He was cured, and after his priestly ordination he built that chapel.

Inside the chapel he placed a wooden statue of Our Lady, based on the image of Our Lady of Peñafrancia which he had held during his illness. Soon miracles were reported—including the resurrection of a dead dog—and the devotion grew.

The image was stolen in 1981 and was missing for a year before it was returned.

A week-long festival is held every September during which the statue is transferred amid great ceremony on a barge from its chapel to the local basilica. (Photo: Ninya Regalado/Wikipedia)