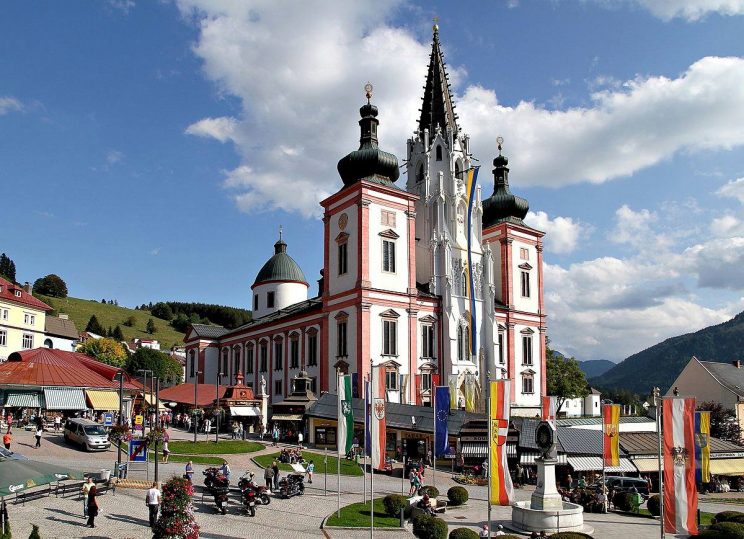 A name that was adopted by Abbot Franz Pfanner in South Africa, Mariazell in Austria’s Styria region attracts a million pilgrims annually to pray to the 13th-century Magna Mater Austriae (Great Mother of Austria) figure.

Legend has it that in 1157 the travelling Benedictine missionary Magnus carried the wooden figure with him in the region when a huge boulder blocked his way. After he prayed to Our Lady, the boulder split, giving the monk free passage to continue on his way.

When he arrived at his destination, he placed the figure on a tree trunk and built a cell around it, which served as both his accommodation and a chapel. The name given to the small structure was “Mary in the Cell”, which later became Mariazell (Mary’s cell).

Today a gothic three-towered basilica stands on the spot; with the monk’s wooden figure of Mary cloaked in finest cloth. Pope John Paul II visited the basilica in 1983 and Pope Benedict XVI in 2007. (Photo: Bwagh/Wikipedia) 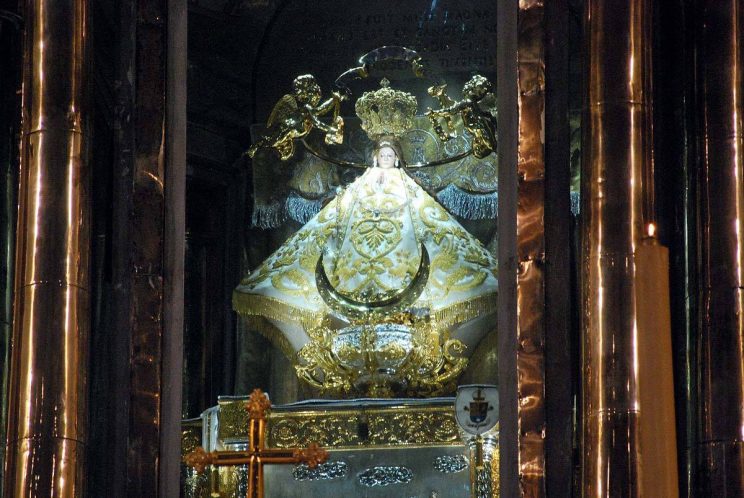 A miraculous resurrection of an aerial acrobat is the source of the shrine of Our Lady of San Juan de los Lagos (or St John of the Lakes) in central Mexico.

In 1623 a family of travelling acrobats came to the town, performing trapeze-type stunts, with swords and knives stacked on the ground for extra jeopardy.

During practice the youngest daughter fell and was killed. As the parents mourned over the dead child, the old wife of the local church’s caretaker placed a disused wooden statue of Our Lady of the Immaculate Conception next to the lifeless body — which then miraculously revived.

News of the miracle spread and veneration grew, among Indians, Mestizos and Spanish. In 1732 a new church was built to hold the 50cm-high statue, which had been made in the early 1500s by Purépecha Indians using an indigenous technique.

Now, every year a million people come from all over Mexico at the end of January and early February for the festival of Our Lady of San Juan de los Lagos. (Photo: Alejandro Linares Garcia/Wikipedia) 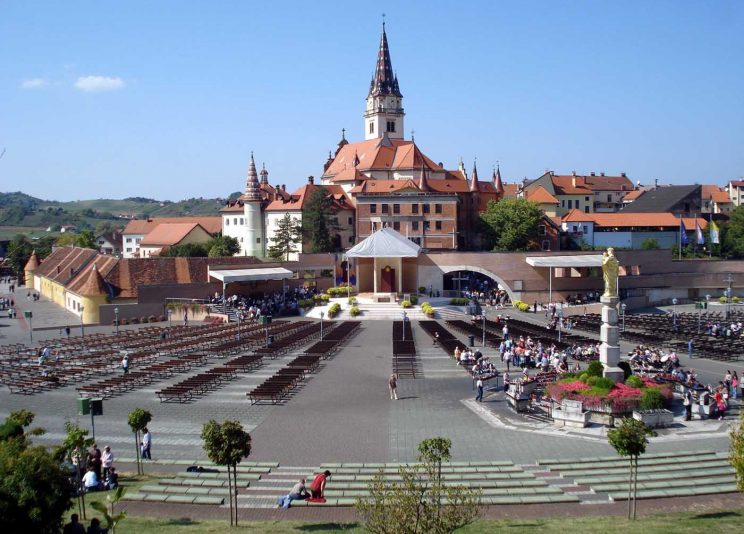 Croatia’s best-known pilgrim shrine is Marija Bistrica in the country’s south. Devotion to its wooden statue of Our Lady with Child—another Black Madonna—goes back to 1545, a time when the Turks were on their march through Europe.

As the Turks approached, a local priest hid the statue, which already was believed to work miracles, from the invaders. When he died, he took the secret of its hiding place to the grave.

The statue was found in 1588; according to legend when a bright light shone from the spot where the priest had buried it 43 years earlier. In 1650 the statue had to be hidden again—and this time remained lost until 1684.

In 1879 a new church was built to house the Black Madonna. During construction, a fire burnt down everything — except the statue and the main altar.

In 1971 the bishops of Croatia declared Marija Bistrica the “national pilgrim shrine” for the region’s faithful. In 1998, Pope John Paul II came there to beatify one of the shrine’s greatest devotees, Cardinal Aloysius Stepinac. ( Photo: Silverije)

17. Our Lady of Kibeho, Rwanda 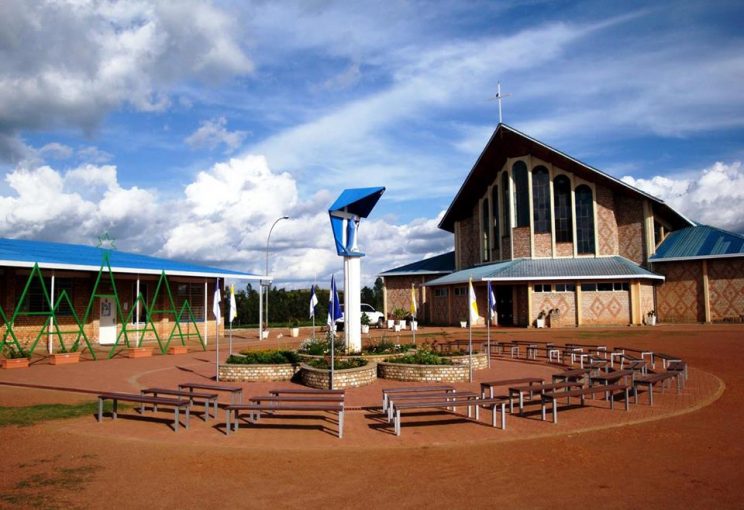 Kibeho in south-west Rwanda is the only Vatican-recognised Marian pilgrimage site in Africa, nicknamed the “Lourdes of Africa”.

In 1981 Our Lady appeared in a series of separate visions to three young women as “Nyina wa Jambo”, which roughly translated means “Mother of the Word”.

The apparitions included an apocalyptic vision of Rwanda being engulfed by gross violence and hatred, with Our Lady calling the people to pray to prevent a terrible war. This is widely interpreted as foreshadowing the 1994 genocide — which claimed the life of one of the visionaries, Marie Claire Mukangango.

While pilgrims came flocking to Kibeho in great numbers already in the 1980s, the local bishop ordered a commission which culminated in its recognition as an official pilgrimage site in 2001.

Four other young people have reported visions, but they are not recognised. (Photo: Kibeho Sanctuary) 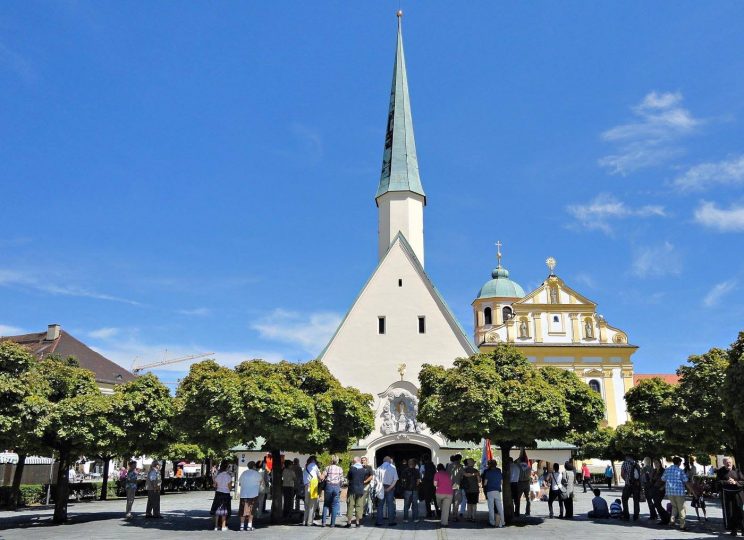 More than a million pilgrims come annually to pray before the Black Madonna in the Gnadenkapelle (Chapel of Grace) of Altötting, “The Religious Heart of Bavaria”.

The carved wooden figure of Mary, 64cm in height, came from France to Altötting in 1330, but it was more than 150 years later that the place became a pilgrim shrine, now Germany’s most popular.

In 1489 two miraculous healings were attributed to the Madonna of Altötting, one involving the reviving of a drowned boy who later became a priest. Many more followed, as the 2000 votive plaques of thanks around the chapel show.

The hearts of many Bavarian monarchs are interred in the chapel, including that of King Ludwig II, the builder of the famous Neuschwanstein castle.

Pope Benedict XVI, who was born just 11km from Altötting, visited the shrine in 2006. There, he placed his episcopal ring, which he had worn when he was elected pope a year earlier, before the figure of Mary. It is now kept in the sceptre of the lavishly dressed Black Madonna.