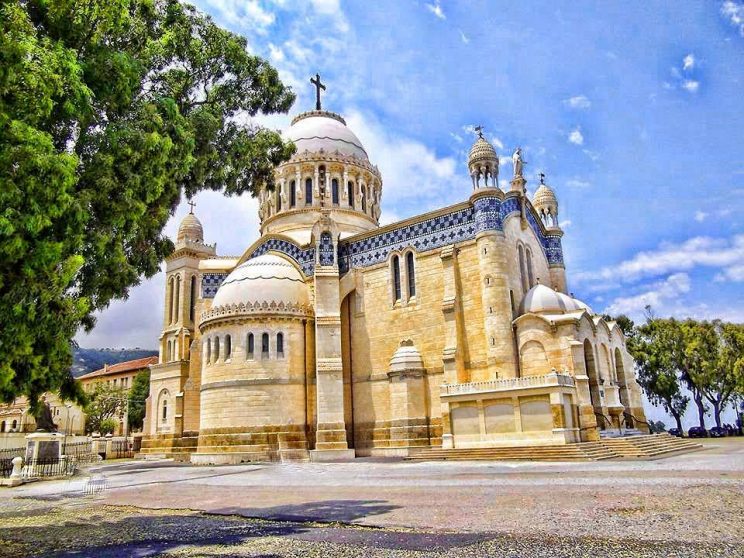 Few sites in this series will feature on the mere grounds that they are dedicated to Our Lady, but Notre-Dame d’Afrique—Our Lady of Africa—seems the right place to start our journey, since it calls us to prayer for Africa, for Our Lady’s protection, and for peace between Christians and Muslims.

The basilica, which overlooks the Bay of Algiers from a cliff, was inaugurated in 1872 by Archbishop (later Cardinal) Charles Lavigerie, who also founded the Society of Missionaries of Africa.

Bombing in World War II blew out its 46 stained glass windows, and an earthquake in 2003 did great damage to the building, which was not repaired for several years. (Photo: Kie1193/wikipedia) 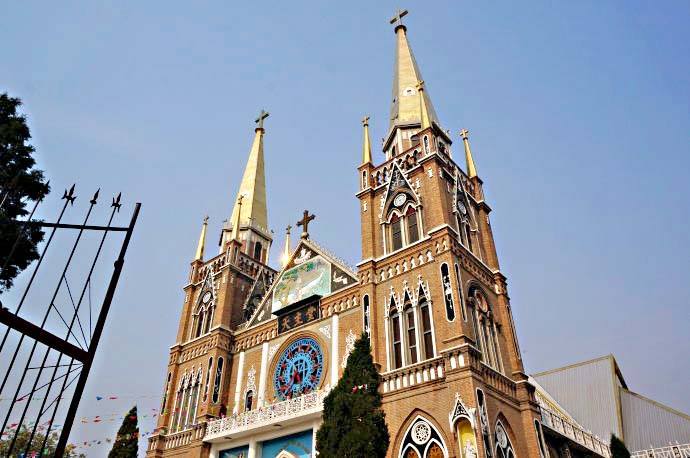 The history of China’s national shrine goes back to the anti-foreign and anti-Christian Boxer Rebellion of 1899-1901, when 10000 hostile soldiers attacked the Christian village of Dong Lu, in Hebei province.

Just then, the Virgin Mary, dressed in white, appeared in the sky. The soldiers shot their guns at the image in the sky, but it would not disappear. Then a vision of St Michael on a flaming horse charged at the soldiers — who beat a hasty retreat, never to return.

In gratitude, the local priest, Fr Wu, commissioned a painting of the Madonna and child, dressed in the clothes of the pagan empress. That image is now known as Our Lady, Queen of China.

Dong Lu’s new church became a place of pilgrimage in 1924 while the bishops of the country consecrated the Chinese people to Our Lady.

The church was destroyed by Japanese bombs in 1941 and rebuilt only in 1992. The image of Our Lady, Queen of China returned to Dong Lu in 1995, with 30000 witnessing a solar miracle.

A year later the Chinese regime banned pilgrimages to Dong Lu and confiscated the image which still hasn’t been returned. Hopefully the recent accord between China and the Vatican will facilitate the return of the image — and pilgrims — to Ding Lu. (Photo: Yuyencia)

38 Our Lady of Banneux, Belgium 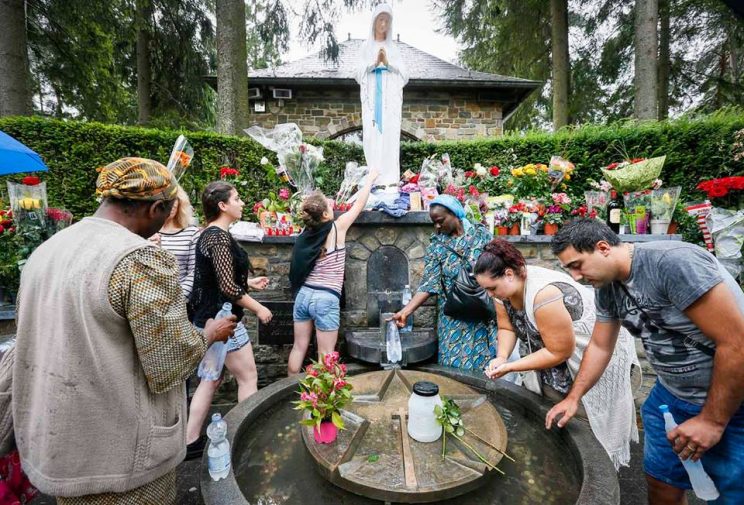 In 1933, the Virgin Mary reportedly appeared eight times to 12-year-old Mariette Beco at Banneux, near Liège in Belgium. Declaring herself the “Virgin of the Poor”, the “lady in white” told the girl: “I come to relieve suffering. Believe in me and I will believe in you”.

Although Mariette received a lot of ridicule, her visions also attracted veneration, with a chapel built the same year. The small spring which the Virgin said to be miraculous now attracts pilgrims looking for healing.

In 1949 Pope Pius XII approved the apparition. Mariette lived a long life, dying at the age of 90 in 2011, having withdrawn from public life soon after the apparitions. “I was no more than a postman who delivers the mail. Once this has been done, the postman is of no importance anymore,” she said in 2008. (Photo: Julien Warnand, EPA/CNS) 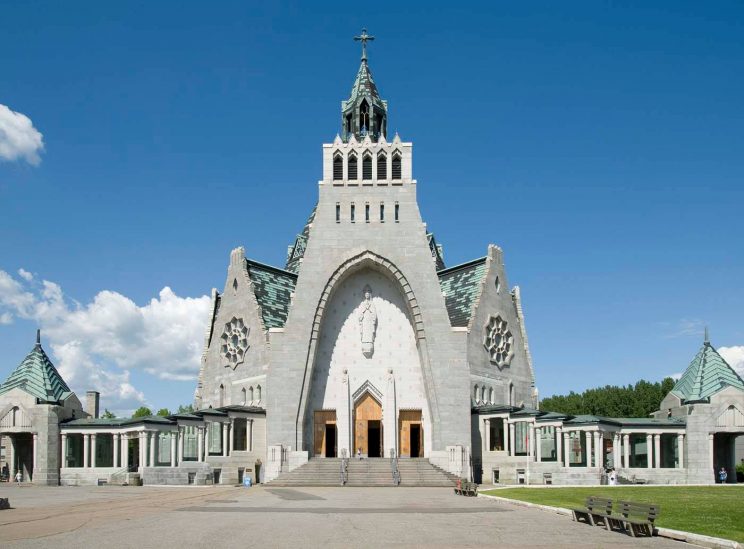 In the 1870s, Fr Luc Desilets of the parish of Cap-de-la-Madeleine in Trois-Rivières in Canada’s Quebec region decided to replace the old church, which had been built as a field church in 1720. Trouble was that, with the St Lawrence River cutting off supply routes and bridges still scarce, it was difficult to get building materials to the site.

That problem was solved when during the otherwise mild winter of 1879, an ice bridge formed over the river—just long enough to get all the materials on-site. This was the answer to the parish’s fervent prayers to Our Lady, so the ice bridge was attributed to her intervention.

The new church was finished in 1888, but the older chapel — in which parishioners had prayed for her intercession—was preserved. And that chapel became a site of pilgrimage.

In 1902, the Oblates of Mary Immaculate assumed guardianship of the shrine, installing a Way of the Rosary with 15 stations representing one of the traditional mysteries.

The present basilica was inaugurated in 1964. The church from 1988 was demolished a year earlier to create a plaza in front of what is now Canada’s national shrine to the Blessed Virgin Mary. (Photo: Saffron Blaze via www.mackenzie.co)

36 Our Lady of Ngome, South Africa 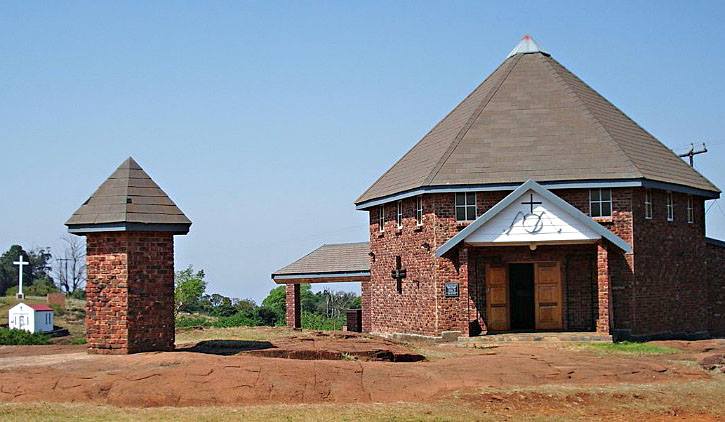 The youngest shrine in this series, Ngome will certainly grow in popularity. Located in rural KwaZulu-Natal in the diocese of Eshowe, Ngome is the site that marks ten apparitions by Our Lady to Benedictine Sister Reinolda May between 1955 and 1971.

The German missionary was a very popular midwife at the Benedictine Mission Hospital in Nongoma — many thousands of newborns went through her hands.

Eight of her apparitions took place in the 1950s; during one of them, Our Lady pointed at the site of Ngome, requesting that a shrine be built there. After 12 years, the Virgin appeared for two more apparitions as Mary, the Tabernacle of the Most High.

First signs of devotion were evident already in 1966, but while the local bishop allowed a small church to be built there, he limited the devotion. But it grew rapidly after Sr Reinolda’s death at 79 in 1981. In 1992 Bishop Emmanuel Mansuet Biyase, who was initially reluctant, allowed the construction of a new church and encouraged pilgrimages to Ngome, where miraculous healings from the water there have been reported.

Sr Reinolda is buried at the nearby Benedictine Inkamana Abbey; her sainthood cause has been opened. (Photo: Lawrence OP/Flickr)