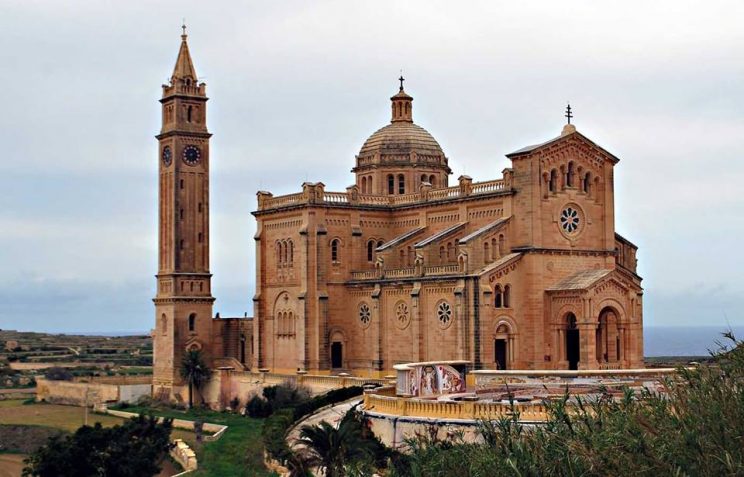 In 1575 a representative of the pope turned up on Gozo island, which is part of Malta, and ordered the demolition of several run-down churches.

One of those was the chapel of the Gentile, named after a local family. But as a worker was about to deliver the first blow in the demolition, he broke his arm. That was seen as a sign that the chapel must be retained.

Two decades later the church was renamed the church of Ta’ Pinu (meaning, of Philip). It was rebuilt in the 1610s.

Fast forward to 1883, when a peasant woman named Karmni Grima heard a female voice coming from the Ta’ Pinu chapel, calling her to enter. Inside she was asked to say three Hail Marys.

For two years Grima kept this encounter secret. When she told her friend Francesco Portelli about it, he confirmed that he too had heard that female voice at around the same time, telling him to honour the “Wound of Christ”. Portelli too had kept the encounter secret.

Shortly after that conversation, Grima’s mother was miraculously healed after praying for the intercession of the “Madonna ta’ Pinu”.

Pilgrimages to the chapel began very soon after. Eventually, in 1922, the old church was demolished to make way for a more suitable church, which was completed in 1932. Pope John Paul II visited it in 1990; Benedict XVI in 2010. (Photo: Mojpe) 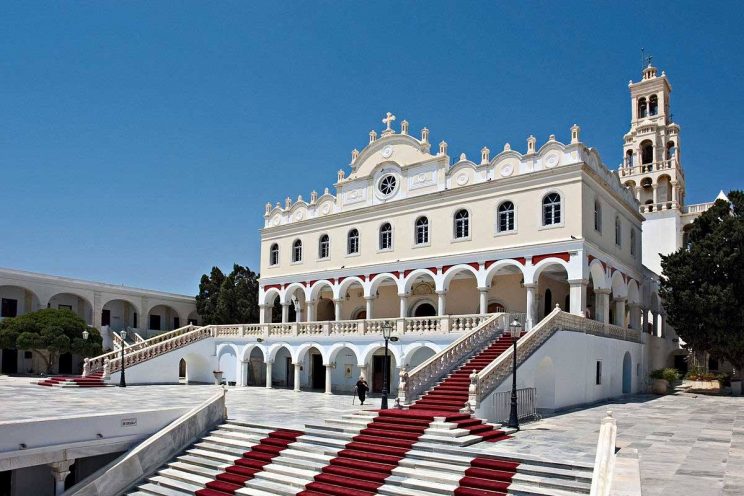 As Fatima or Lourdes are to Catholics, so is Our Lady of Tinos to Greek Orthodox, whose devotion to Our Lady is no less than ours.

Located in Tinos, on the Greek island of the same name, the Marian sanctuary is a complex focused on a miraculous icon of Our Lady.

The icon was found buried in the ground after the Virgin, in an apparition, directed the nun Pelagia to it in 1822. It was the day after the founding of the modern state of Greece. Our Lady of Tinos is therefore the country’s patron.

Like several other icons we encounter in this series, legend attributed the icon to St Luke himself. Referred to as the Megalóchari (“Great Grace”), the icon is believed to have led to many miracles.

The shrine church is dedicated to the Annunciation, but its principal feast is the Assumption.. (Photo: Hans-Peter Schäfer/Wikipedia) 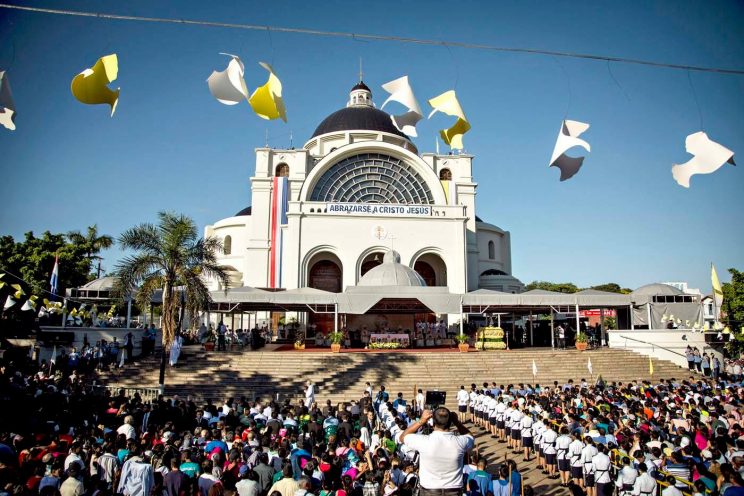 The story of devotion to Our Lady at Paraguay’s national shrine goes back to the time of South America’s evangelisation in the 1500s, when some tribes converted and others were violently opposed to Christianity.

One day, a convert named José went into a forest to find wood from which to carve a Marian statue for a chapel. Suddenly he was surrounded by hostile tribesmen. José managed to hide in a hollow tree and prayed to Our Lady, who then appeared to him in a pillar of light. José was saved and in gratitude he carved two statues of Our Lady, one for the chapel and one for his home.

Some time later, in 1603, a flood wiped out everything in the area, including José’s house. All that survived intact was his carved Mary, floating on a lake. The locals soon began venerating the statue as Our Lady of Miracles. It eventually found a permanent home in the city of Caacupé, where it is now kept in a church built in 1980.

Pope Francis celebrated Mass at the shrine in 2015 and declared the church a minor basilica. (Photo: Santi Carneri/CNS) 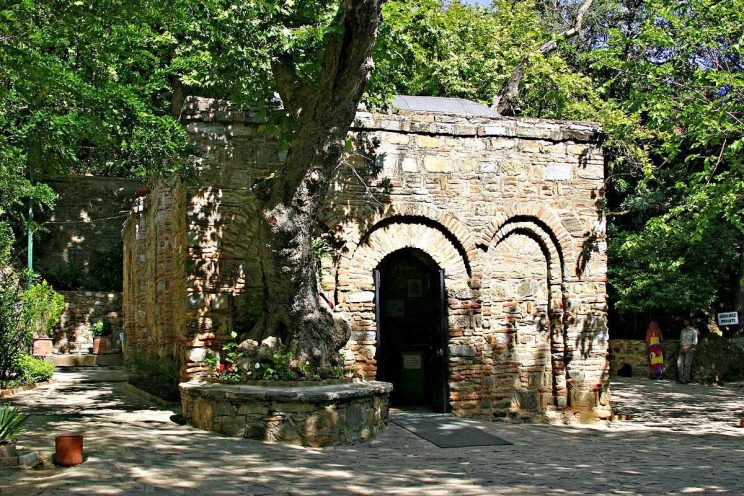 Mary’s House in Ephesus, near modern-day Izmir in Turkey, is a popular Marian pilgrimage site — the problem is that there is no evidence that Mary ever was there.

The idea that Mary lived in Ephesus is based on the tradition that John, the beloved disciple to whom Jesus entrusted the care of his mother, moved to city some time after the crucifixion.

There is no evidence that he did so before Mary fell into her eternal sleep—and we know from ancient records that this happened in Jerusalem (indeed, the text from which we know that is one of the foundations of the dogma of the Assumption).

We also don’t know when John moved to Ephesus. Since his gospel was possibly written in the city in the 90s AD, he might have come there late in life.

While there were tenuous notions as well as a local tradition of Mary’s presence in Ephesus, it was the 19th-century visions of the German nun Anne Catherine Emmerich which led to the identification of the “House of the Virgin”, which is now a hole in the ground.

The Catholic Church has not recognised Mary’s House as authentic, but three popes have visited the site: Paul VI in 1967, John Paul II in 1979, and Benedict XVI in 2006. (Photo: Martin H Fryc) 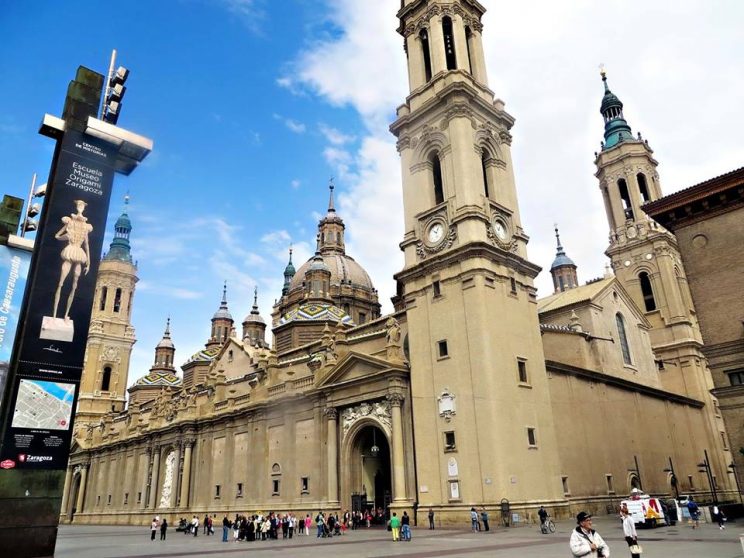 Our Lady of the Pillars is by far the earliest recorded apparition of Our Lady, possibly taking place even during her lifetime.

The apostle James the Greater had travelled to Spain to evangelise the pagan territory—and made very little progress. Then, on the second day of the year 40 AD, as he and his companions stood on the banks of the Ebro River, the Blessed Virgin appeared to him upon a pillar of jasper and instructed him to use it to build a church at that spot. He did as he was told, and soon the Good News spread throughout Iberia.

Where St James built that first church now stands an imposing basilica dedicated to Our Lady of the Pillars, whom St John Paul II described as the “mother of the Hispanic peoples”.

The reputed column is still venerated in the 17th century church. It is topped by a 15th-century statue of Mary, whose vestments are changed every day. Pilgrims can touch a small section of the pillar through the back of the chapel in which it is kept. (Photo: Günther Simmermacher)