35 Our Lady of Walsingham, England 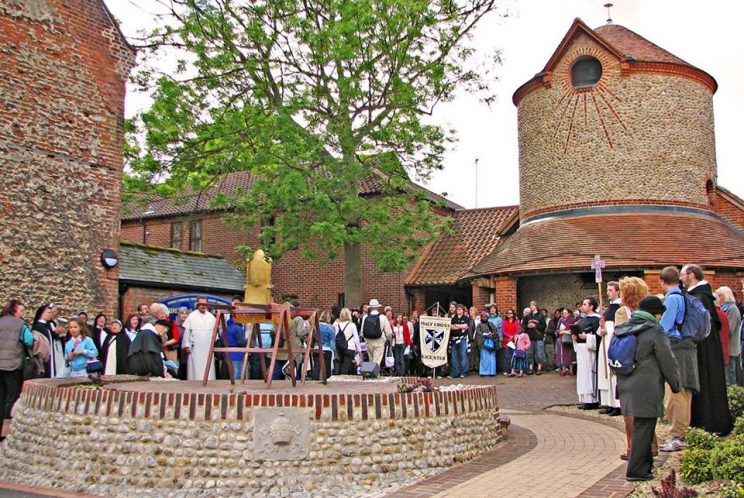 In 1061, the Virgin Mary appeared in the village of Walsingham in Norfolk to a pious English noblewoman named Richeldis de Faverches, in whose ecstatic visions Mary transported her to Nazareth to show how the Holy Family had lived.

Lady Richeldis erected a structure which she named “The Holy House”, which was then expanded to become a priory and England’s most important site of pilgrimage, enjoying the patronage of many kings. It held the original carved statue of Our Lady of Walsingham, which Lady Richeldis had obtained from Oberammergau in Germany.

The priory was suppressed and its riches looted or destroyed during the anti-Catholic suppression of Thomas Cromwell in 1538. The statue of Our Lady of Walsingham was burnt at Chelsea in London.

Today there are two shrines of Our Lady of Walsingham: one Catholic and the other Anglican. The Catholic shrine was re-established in 1897, with the chapel built in 1934 on the site of the “Slipper Chapel”, which stood a mile outside the original shrine. It is dedicated to Our Lady of the Annunciation.

The Anglican shrine was built in 1938. Relations between the custodians of the two shrines are now very good. (Photo: Catholicportal/Flickr) 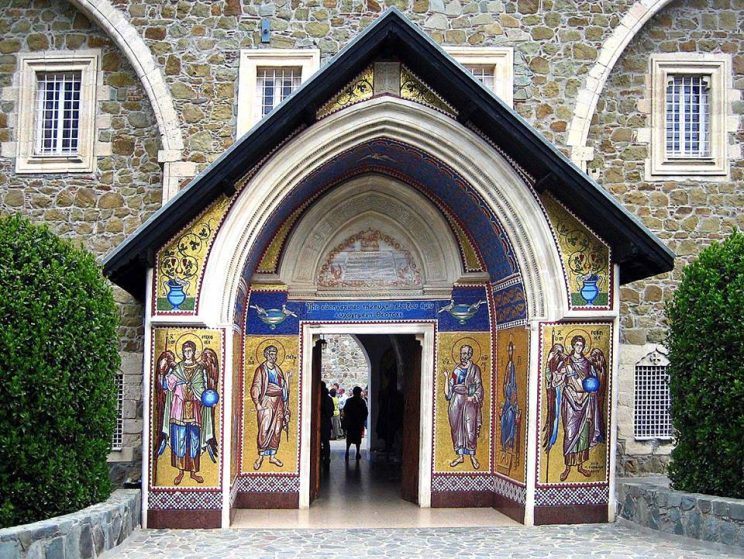 Originally founded in the 11th century in the mountains of Cyprus, the Orthodox Kykkos monastery has been repeatedly burnt down and rebuilt.

The centrepiece here is the miraculous icon of the Panagia, as the Orthodox call Our Lady, which legend says was painted by St Luke himself—something which will be a recurring theme in this series.

The icon came to Cyprus via Emperor Alexios I Komnenos, in thanksgiving for the miraculous healing of his daughter by the hermit Isaiah. The emperor also funded the construction of the monastery to house the icon.

The first president of the Republic of Cyprus, Archbishop Makarios III, served as a novice at the monastery in 1926. When he hid there during Cyprus’ civil war in 1974, opposition forces shelled the monastery, causing damage to the building. ( Photo: Oceco/wikipedia) 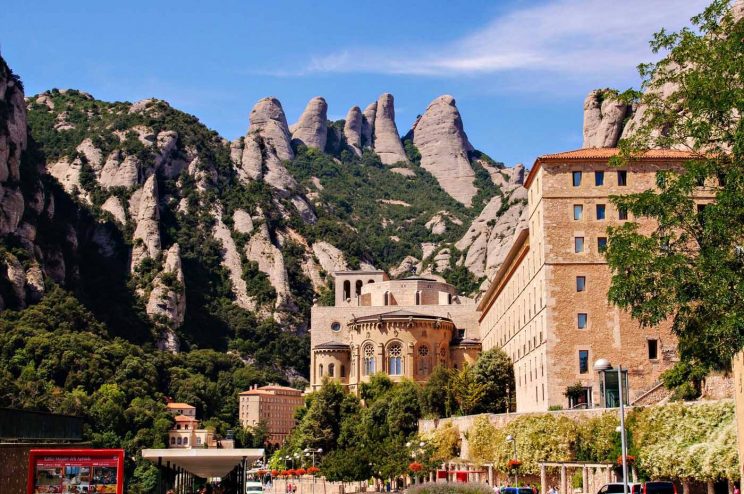 The Benedictine abbey of Monistrol de Montserrat is built on the Montserrat mountain in Catalonia, Spain. Founded in the 11th century, the current structure dates to the 19th and 20th centuries. Its centrepiece is the 95cm-high statue of the Virgin of Montserrat, a Black Madonna.

The provenance of the Byzantine-style figure is unknown; it is believed it was hidden from the invading Saracens in the mountain in the 8th century. Legend has it that when the Benedictines wanted to build their monastery there, the statue wouldn’t move and they had to build around it.

Devotion to the Virgin of Montserrat has a very long tradition. Among those who came to venerate it was St Ignatius of Loyola, who laid down his arms before her in 1522 and then entered a period of discernment that led to the foundation of the Jesuits.

More recently, the abbey of Montserrat gave refuge to opponents of the fascist Franco regime. For many, it is a symbol of Catalan nationalism. ( Photo: Anton Ignatenko) 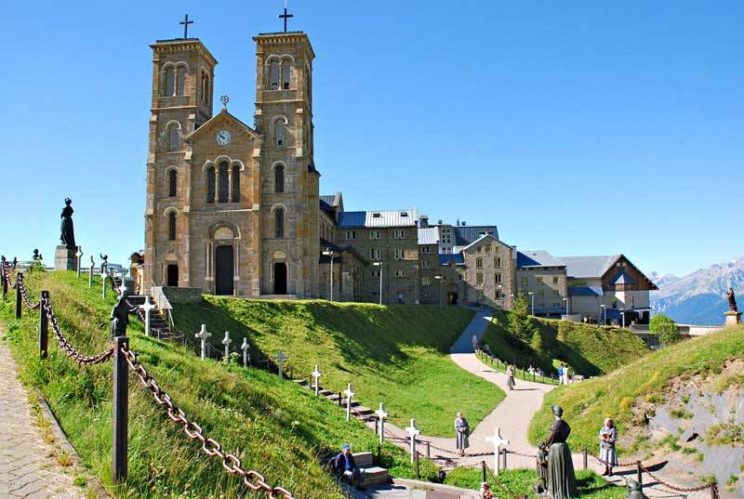 When the weeping Virgin appeared to two peasant youths in the French village of La Salette, in south-eastern France, in September 1846, she foretold terrible punishment involving a shortage of potatoes. The following winter, there was a famine which hit France and Ireland particularly hard.

The apparition to the children, Maximin Giraud and Mélanie Calvat, was quickly taken seriously. By 1949, three miraculous cures were reported. Within five years of the vision, after a thorough examination, the local bishop authorised veneration of Our Lady of La Salette. 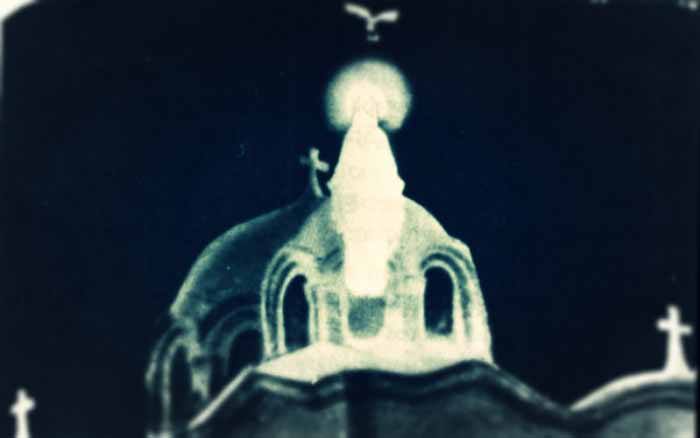 There are three principal sites of modern Marian apparitions in Egypt: in Assuit, in the centre of the country (2000-01), at Warraq in Giza (2009), and in the Cairo suburb of Zeitoun. The latter attracts the greatest devotion among Copts, as Egypt’s Christians (mostly Orthodox) are known—as well as among Muslims.

On several occasions between 1968-70, hundreds of thousands of Christians and Muslims gathered outside St Mary’s church—where tradition holds the Holy Family stayed during the Flight into Egypt—to witness inexplicable appearances in the sky above the church of a huge luminescence in the vague shape of a woman. This would happen as often as two or three times a week.

Among those who saw the apparition was Egypt’s President Gamal Abdel Nasser.

The Coptic Church investigated these luminous phenomena in the sky, as did the Egyptian police. Nobody could explain them. Police confirmed that no device could be found within a radius of 25km which might have had the capacity to project the image. The Coptic pope approved the apparitions; the Vatican deferred to the Coptic Church.

In a country where the 20% population of Christians often feels oppressed by the Muslim majority, Our Lady of Zeitoun is a source of good interreligious relations. Many Egyptian Muslims have a devotion to the Blessed Virgin, and it is not unusual to see followers of Islam enter St Mary’s church to pray.