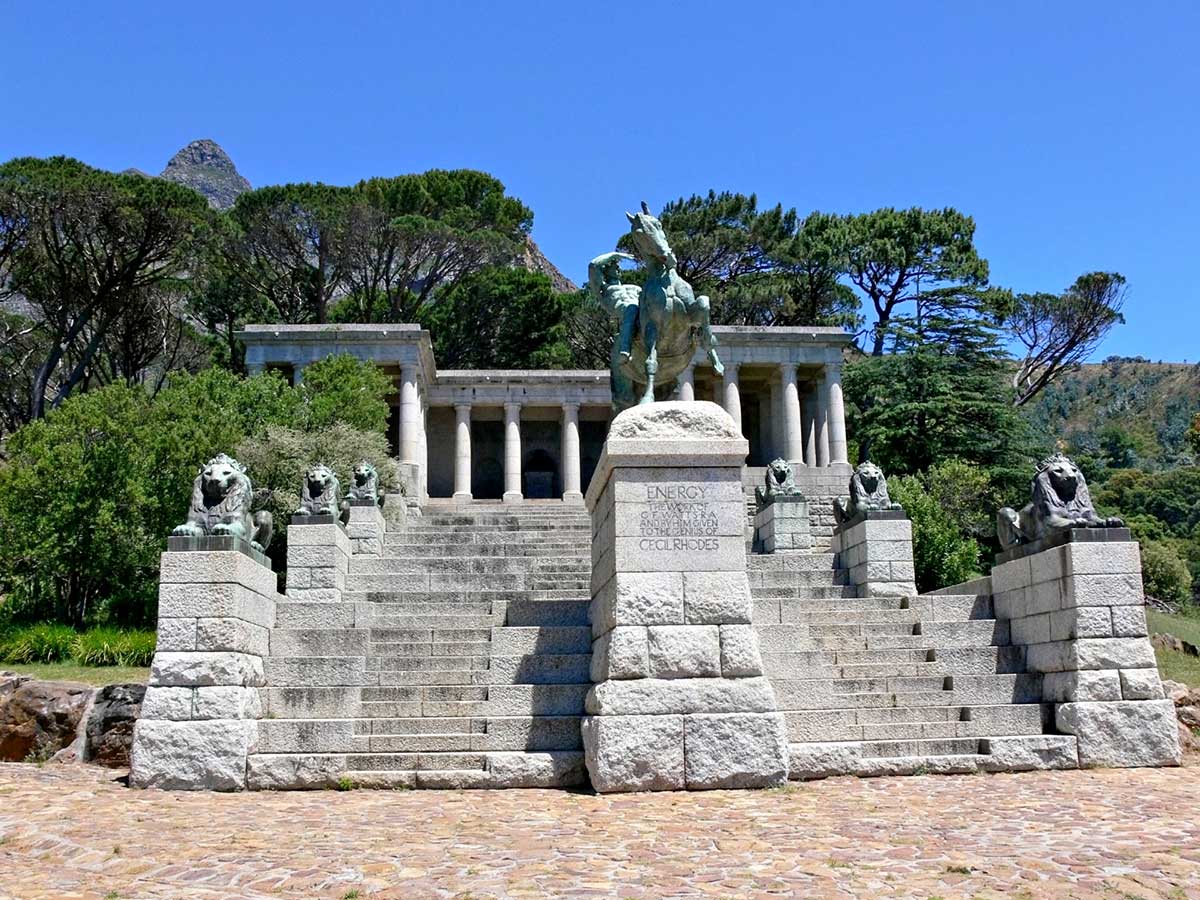 Rhodes Memorial in Cape Town: For some a page in our history that should stand forever, and for others a monument to injustice which should fall.

Your faithful columnist popped over from Durban to Cape Town in April and shared a round of coffee with your (and my) editor, Günther Simmermacher, and Rosanne Shields, chair of The Southern Cross’s board. I was pleasantly surprised by the choice of tea shop — one with a spectacular view of Cape Town, but one also associated with a contested part of South African history.

A few days later that tea shop was no more, having been destroyed, along with a number of buildings at the University of Cape Town and the old Mostert’s Mill, in a tragic forest fire.

We had been meeting at Rhodes Memorial. As a Brit, a student of colonial history, and an alumnus of Oxford University, I am at the very least intrigued by the figure of Cecil John Rhodes. But I am aware that there are also many people who were disappointed that the controversial monument had survived the fire.

Of course, if statues are to fall, then it should be as a result of an intentional and controlled act – not a random fire or (potentially) an act of vandalism. But I confess to being very ambivalent on the question of statues and, if I may, I feel that this reflects a Catholic way of engaging with the past.

One of the aspects of our religious tradition that is most admired by members of newer Christian congregations is the sense of history that we have. Our buildings are often old; our liturgies draw on ancient traditions; and we still use words in our prayers that date back to the earliest Christian centuries.

Each time we celebrate a feast in the Church’s calendar, we are linked back to those who have celebrated the same feast on the same day for centuries before — not just Christmas and Easter but also the Annunciation, All Souls or, as we are doing this month, Ss Peter and Paul.

A group of young African Oblates who were ordained as priests at Emmanuel cathedral recently were conscious that they are the heirs to Archbishop Denis Hurley and the other Oblate bishops who are buried around the altar, and to the young French Oblates who came to South Africa more than 120 years ago and are buried just outside the cathedral, having died within a few years of arrival.

Catholics and the past

Ours is a tradition which always has a relationship with the past. Sadly, sometimes we are tied by the past. Worse still, we can have a misguided view of it — how many people defend the “ancient” Tridentine rite, which is only 450 years old, as though it had been celebrated by the Apostles themselves?

While the Second Vatican Council is often described as the modernisation of the Church, key to its ways of working was to go back to the origins of Catholic practice and be nourished again from the roots — “ressourcement”, as it was termed.

So I hope we can contribute in an intelligent and informed way to conversations about statues and whether or not they should fall. To wipe out symbols and memories of the past as if they did not happen is to deny where we have come from; but to treat the past as sacrosanct and beyond questioning is to deny the journey we have travelled.

So we need to acknowledge that a certain statue has existed in a place often for a long period of time, but then we must also ask honest questions about why the statue was placed there in the first place, and what it can say to us now.

These are questions which society is rightly asking about the statues from secular history; as Catholics we have to ask similar questions about the statues from our ecclesial history. Rome is full of statues of saints whose lives, by definition, we hold up for veneration. But its churches are also adorned with statues of popes and their families whose lives were sometimes less than admirable.

How do we feel about the fine marble tomb of Alexander VI, given what we know now about the corruption, incest, nepotism and violence that characterised the Borgia pope? In time, bishops who in recent years have been disgraced for their mistreatment of abuse cases will die: should they be venerated in their cathedrals, as is our custom, or do they not merit such posthumous respect?

There is a church where a priest left in disgrace. When I visited there and saw his name still gracing plaques as if nothing had happened, I wondered who was being served by such collective amnesia.

There are no easy answers to such questions, but that is all the more reason to ask the questions and to explore creative solutions. Let me share with you one of my favourite examples of the statue conundrum. When India gained independence in 1947, its capital city, New Delhi, was adorned with the statues of old white British men who had ruled the country over the previous few centuries.

It was clear that the statues could not stay in such places of prominence — but a decision was taken that, instead of being destroyed, they should just be moved.

So they were gathered up and placed collectively at a significant but forgotten site on the outskirts of the city. It is the field where in 1911 George V, King-Emperor, received homage from the Indian princes at the Delhi Durbar; this had been chosen as the site of the new capital until they discovered how mosquito-infested it was and moved the new capital to where it is now.

So the statues are in place which recall the grandeur of the Empire but also its arrogance and folly. And George V in marble is surrounded by a circle of viceroys and generals; and slowly in the hot Indian sun and wind the statues are eroding and losing their detail over time.

We should be wary of destroying symbols from our past – but we can and must interrogate them and interpret them. In that way, we can allow these symbols to inform our present and, in time, their significance will change and diminish.

This article was printed in the June 2021 issue of The Southern Cross
Subscribe to receive more content like this.  There is a range of options – 3,6,12 months and print, digital or a combination subscription to both (for the same price!). Order latest editions or back-copies at R30 (plus R12 p&p) from admin@scross.co.za, or order online for your parish